Adelaide overcame a recent run of outs and a determined second-half Hawthorn rally to notch a gritty win over the Hawks and almost certainly avoid a second successive wooden spoon.

The Crows were electric early, suspect at times in the middle, and brave late to snap their four-game losing skid. 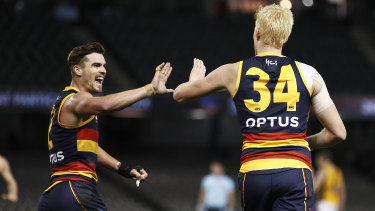 Rory Laird and Reilly O’Brien proved a formidable tandem in the centre-square while Taylor Walker (four goals) proved too much for former teammate Kyle Hartigan to handle in the Crows’ attack.

Adelaide’s explosive, daring ball movement early set up the win and was reminiscent of the method they employed when they shocked premiership contenders Geelong and Melbourne earlier this season.

But it was completely at odds with the sluggish, untidy style that had plagued their play in more recent times.

Dead-eyed Darcy Fogarty goaled twice in the first term, the first a fine left-foot snap from the pocket, as Adelaide held sway by 12 points at the end of a first-quarter shootout.

The Hawks employed a higher press as they changed things up defensively in the second term and worked their way into the contest.

But it was still on Adelaide’s terms as Elliott Himmelberg converted with aplomb on the half-time siren to give the Crows their ninth major – more than they have conjured in each of their past three weeks – and a 15-point buffer.

Ben Keays’ major early in the third stanza extended Adelaide’s lead to 22 points, which was completely erased when Hawthorn produced their finest moment of the night.

Unanswered goals to Tom Phillips, Tim O’Brien, Luke Breust and Tom Mitchell gave the Hawks the lead from out of nowhere.

But Adelaide, piloted by Laird, responded to the challenge, jumping back in front at the final change and keeping the Hawks at arm’s length in the fourth to win 16.6 (102) to 13.5 (83).

Lachlan Murphy hurt his right ankle in a clash of legs with Phillips early in the third stanza and medical substitute David Mackay looked set to come on.

Following a lengthy fitness test on the sideline, Murphy came back on mid-quarter and kicked an important goal to break the Hawks’ run of four straight and give Adelaide the lead back.

Murphy eventually subbed out for Mackay in the fourth after it had appeared captain Rory Sloane would be the man to retreat to the bench.

Midway through the final term Sloane, who missed footy earlier this season with a detached retina, had his left eye accidentally scraped by teammate O’Brien before ultimately being cleared of any further vision issues.

MORE ON THE RISE

In anyone’s conversation for the competition’s most improved player, Dylan Moore had a fine night and is enjoying a breakout individual campaign, even if it has been one for his team to forget.

Virtually on the scrapheap at the end of last year, Moore announced himself as one of the most dangerous small forwards in the competition, continuing a rich tradition – names like Cyril Rioli and Paul Puopol spring immediately to mind – of skilful pint-sized Hawthorn goalsneaks in recent years.

Brodie Smith’s penchant for launching long goals is well known but even he would scarcely have been able to believe the incredible six-pointer that he produced on the cusp of time-on in the opening quarter.

A disputed footy spilled loose just forward of the middle when Smith, off half a step and with a snap around his body, somehow launched the ball 65 metres for Adelaide’s fifth goal.

Seven minutes later, Murphy spilled a sitter in front of Tom Phillips before recovering smartly, picking up his mess and snapping over his head majestically.