Brad Fittler is poised to pull a State of Origin shock with giant Roosters winger Daniel Tupou set to be parachuted into the NSW squad and Blues stalwart Jake Trbojevic set to be axed.

Sources with knowledge of selections told the Herald that Jacob Saifiti, whose brother Daniel is missing through injury, has emerged as an Origin bolter and is on the way to Sydney from Newcastle with teammate Tyson Frizell to join the Blues in camp.

Trbojevic, who has played every game for NSW under Fittler in which he’s been available (he missed games two and three last year through injury), has been left out of the squad altogether in a major surprise.

It remains unclear whether Jacob Saifiti will play or if he is just part of the extended squad.

Stephen Crichton will make his State of Origin debut after winning the race for one of the vacant spots in Brad Fittler’s NSW backline, with Panthers teammate Liam Martin fighting for a position in the 18-man squad.

And he could feature in a new-look outside backs with Fittler banking on Tupou’s height to potentially counter the aerial threat of Queensland wingers Xavier Coates and Selwyn Cobbo, who is poised to make his Maroons debut. 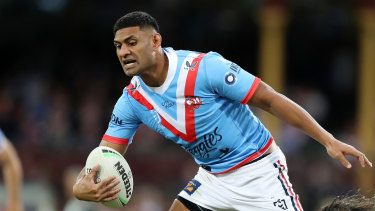 It leaves Josh Addo-Carr in limbo before Sunday’s clash between his struggling Bulldogs and the Dragons. Addo-Carr has been a mainstay of Fittler’s squad since he took over as NSW coach in 2018.

While the news was good for Tupou, it wasn’t so bright for Roosters teammate Angus Crichton who is set to lose his spot in the NSW team.

Stephen Crichton has been told to head into Blues camp on Sunday and will wear NSW colours for the first time at senior level after an impressive start to the season with the premiers.

Fittler had been searching for two new centres after injuries to last year’s heroes Tom Trbojevic and Latrell Mitchell.

But Martin, who played all three games for NSW last year, is poised to be part of Fittler’s extended squad of 22 pending the outcome of Sunday matches between the Bulldogs and Dragons as well Raiders and Eels.

Hooker Api Koroisau is poised to shadow first-choice No.9 Damien Cook and also be part of Fittler’s extended squad.

Sharks halfback Nicho Hynes is set to be included in Fittler’s extended squad after his stunning start to the year with Cronulla after his off-season move from the Storm.

South Sydney skipper Cameron Murray has been rushed back into the Blues set-up after making a successful return from minor shoulder surgery on Saturday night.

He was spotted entering NSW camp in Coogee on Sunday.

‘Just go ahead and do it’: Beveridge wants AFL draft age raised now