Home » Rugby » Daniher to be assessed but ‘big chance’ to face Cats: Worsfold

Essendon coach John Worsfold maintains Joe Daniher is a "big chance" to play against Geelong on Sunday but his workload will be a major consideration ahead of selection.

Daniher is two games back into his return from a year-long absence because of groin issues but a compressed season means he does not get the rest between matches that he would normally have. 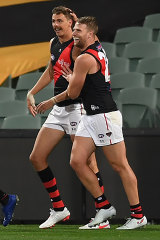 "As we have discussed a fair bit, the shorter game times are making a big difference on how players are pulling up post games. We will weigh that up – his workload versus what we have coming up.

"We don't have to see anything in particular from Joe. It's around assessing how exactly he is feeling and then us picking a side that we think takes everything into account. There are a lot of players coming off the five-day break that we will be assessing in a similar vein to Joe."

After the Cats clash, the 6-7 Bombers, two games outside the top eight, face the Power in Adelaide on Saturday week, and Melbourne in the final round.

As the Bombers debate whether to play Daniher, who is off contract and weighing up his future, they remain confident fellow forward Jake Stringer can recapture his early-season form.

Stringer was goalless against the Eagles but had three goals combined against Richmond and Hawthorn in his two previous matches back from an ankle injury.

"He has done really well to get himself back up and ready to play again but he hasn't hit his straps yet. That's not far away, I don't think," Worsfold said.

Worsfold said skipper Dyson Heppell had "pulled up pretty well" in his return from injury, while the Bombers are debating who should replace Andrew McGrath, who will miss the rest of the season because of a syndesmosis injury. Tom Cutler, Kobe Mutch, Brayden Ham and Mitchell Hibberd were fighting for a call-up, Worsfold said.

Tom Bellchambers (bone bruising) and Aaron Francis (hamstring tendonitis) have been ruled out of Sunday’s clash.