For the last two years of Paul McGregor’s coaching career, Jack de Belin was more than just the elephant in the room: de Belin’s court case cast a large shadow over the entire club. The issue needed a different approach.

“It’s quite simple really,” Dragons skipper Ben Hunt told this column. “We’ve taken the view that he won’t be playing for us, so we don’t think about it. If he does, that’s a huge bonus, but our mindset is that we are playing without him [while the case is resolved]. That makes things simple.” 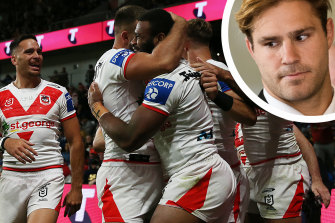 There has been nothing simple about the de Belin situation. No matter the outcome of his case, the ramifications have had an enormous impact on a lot of people. De Belin and Callan Sinclair are facing a retrial on five counts each of aggravated sexual assault in relation to an alleged incident in Wollongong on December 9, 2018. Both have denied and are defending the charges.

On Sunday, as the Dragons attempt to send a signal that they are genuine finals contenders with a win over the Roosters in the annual Anzac Day clash, McGregor, the club’s coach for seven years, gives his account of how the de Belin case affected his tenure and why the current situation is working for the club.

“We were the first team to deal with the new rule [the NRL’s no-fault stand-down policy] and there is no doubt that impacted us … because we were the first,” he said. “There was no formula, no textbook, no other cases on how to deal with it. We didn’t know how it would impact us, but it did. Where did we get it wrong? Well, we certainly underestimated how long things would take. We got that very wrong. We thought when it happened it would be over in the space of a couple of months. But it’s still going.”

‘Watching Jack train and look better than any of the other players in training has an impact on the team.’

The situation spiralled out of control as the Dragons prepared to play Newcastle in Mudgee on May 19, 2019, days after the no-fault stand-down rule was cleared by the Federal Court. Dragons players were genuinely considering whether they wanted to continue. It was a lot for the team and the coach to deal with. Again, they were in uncharted waters.

“I am not going to divulge the contents of a private meeting,” McGregor said. “I will say this much, the players were discussing their options and they were confused and upset.

“It was difficult. They wanted to know what they could do to express their feelings about what took place. They looked at all options. And the ongoing situation was not ideal. Watching Jack train and look better than any of the other players in training has an impact on the team.”

Does McGregor regret not making de Belin train away from the team, as is happening now? 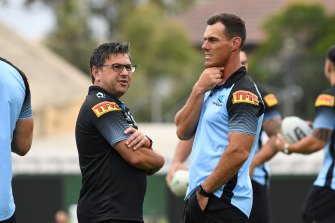 There are a few elements to this. It was a decision that was endorsed by the entire retention committee, including club chairman Steve Mace. Also of interest is that when Craig Fitzgibbon met Townsend during the week he told the halfback he was part of the club’s plans for the future.

Townsend’s decision to leave left him close to tears, but it was made easier by the hefty deal he’s landed with the Cowboys: $2.4million over three years and a car. The Sharks kept him for years on less money, so the deal reflects well on Morris.

Jackson Hastings is doing his best to dodge the limelight after signing with Wests Tigers, but Wigan coach Adrian Lam – where Hastings now plays – hasn’t held back with his praise.

“He’s the ultimate competitor,” Lam said. “Jackson hates losing. He trains as well as any player I have ever coached and sets the standards at training. I’d go as far as to say that he is at the same level as Mitchell Pearce in his prime.

“The Tigers will find they have signed a very smart footballer. He’s a great talker and will get the team around the field. He loves his rugby league and whilst he is training or playing, life is good.” 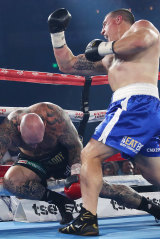 How interested was Sonny Bill Williams in Paul Gallen’s fight with Lucas Browne on Wednesday night? SBW was sipping on freshly made carrot and orange juice at a cafe in Lakemba with his mates as Gal knocked out Browne in less than two minutes in a very disappointing heavyweight showdown at the WIN Entertainment Centre.

Williams continues to hear the talk that Gallen has passed him by and remains indifferent.

George Piggins has not been in great health for some time and all Souths fans are in his corner.

While Russell Crowe and Peter Holmes a Court revolutionised the Rabbitohs, Piggins saved them. Piggins has made his peace with the club after it was sold to Crowe and Holmes a Court, but he has had next to no involvement with the Rabbitohs in recent times, so much so that Wayne Bennett admitted he has only ever met Piggins once in his lifetime.

There is no question there are lingering issues with the Piggins family and Souths, but following suggestions that the club and chairman Nick Pappas had snubbed him, it was pointed out to me that Pappas, Bennett and chief executive Blake Solly had sent a generous hamper to Piggins to let him and his family know they were thinking about him. Solly is also in regular contact with Piggins’ family.

Gus to the rescue?

Phil Gould wants the NRL judiciary to be blown up and the game’s administration to start again.

And Gould should be the one to put it back together. When this suggestion was put to the NRL this week, it didn’t jump at the idea. But it’s time it put egos aside and let Gus loose – on the judiciary and other areas of the game. There are lots of areas he can help in and he has been a sounding board for ARL Commission chairman Peter V’landys and NRL chief executive Andrew Abdo.

It will take a brave leader to pull the trigger and let loose the best football mind in the business.
The NRL was never going to please everyone at the judiciary during the week, but somehow it came up with a result that pleased nobody. And, in the process, it has again exposed the match review system as so confusing and complicated that fans don’t trust it any more.

Players are charged but then have their sentences reduced or increased depending on their records and then they risk getting a tougher penalty if they challenge the charge. The end result is that, when a player is charged, no one has any idea how many games they will miss.

Fans know what sort of penalty a player should get. Most would have thought Victor Radley would maybe get a week, while Paul Momirovski and Latrell Mitchell would get one to two weeks. But thanks to all the quirks in the system, Mitchell – one of the game’s biggest drawcards – is out for four weeks. And fans are again screaming that the Roosters got favourable treatment because Radley walked free.

Yet, there is no public statement explaining the reason for the difference in penalties or for coming down so hard on Mitchell. The NRL has been promising to reform the judiciary system for years and we are still waiting.