Michael Hooper has emphatically declared he wants to remain Wallabies captain in the future, saying he cherishes the role and doesn't regret his on-field decisions in Australia's draw with Argentina two weeks ago.

In the final match of 2020, between Australia and Argentina at Bankwest Stadium on Saturday, Hooper will lead his country out for the 52nd time, putting him third on the overall Wallabies list behind George Gregan (59 Tests) and John Eales (55). 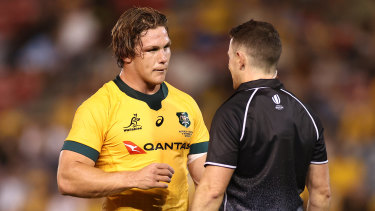 Michael Hooper and the Wallabies could not get past Argentina two weeks ago.Credit:Getty

Never one to back down from a hard question, Hooper was resolute when asked if he'd thought about standing aside.

"Why would I? I'm focused on Saturday," he said. "Haven't thought about it."

Pressed on whether he wanted to remain in the role, Hooper said: "Yeah, I think it's a massive privilege to captain your country. I've been very lucky to do it on many occasions and I love that. It's very rewarding as a unit and as a team when that group comes up with a plan and you execute a plan. It's super rewarding post-game when you put in a performance you're proud of.

"They're the things, why you put yourself in this position. There's plenty more opportunities to get some better ones as well. That's very exciting for the future too." 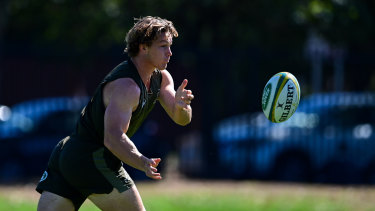 Hooper also rubbished talk that the national captaincy was something that was thrust upon him, rather than him grabbing it.

"I get to stand in the line and not only represent my country but lead some men that have sacrificed a lot and we get to do a lot in the jersey and do that all across the world. I love that," Hooper said. "I know it's only a finite time you're able to do that in anyone's career. [It is a] great privilege and probably the longer I'm in the game, the more I realise the great position that we are in."

The Wallabies turned down four kickable shots at goal during their 15-15 draw against Argentina in Newcastle but many inside camp have admitted they should have put the Pumas away when they were leading by nine points.

Hooper, who has made the call to kick for the corner many times in his international career, is unapologetic when asked about his decision-making.

He says tries will be firmly on Australia's mind as the men in gold look to finish the year on a high.

"I was very pleased with my decisions in the last game," Hooper said. "We had our opportunity there to take the win and move away with it. At 6-15 with 19 minutes to go, we were primed to move and put that game to bed which we weren't able to do through our lack of discipline and game management there. We'll be better for that.

"Would love to get some tries. [Wet] weather is going to be a factor into that but we want to get our wingers in the corner and get the ball in our exciting guys' hands.

"We've got to play in smart areas of the field. [Nicolas] Sanchez has got an amazing boot on him. He did damage on us in that last game."

2020 hindsight: how the AFL found a way through the season