Melbourne has dominated the AFL Awards night with the most players named in the All-Australian side, Max Gawn selected as the captain of the team, and youngster Luke Jackson taking out the Rising Star gong for 2021.

The Demons finished on top of the ladder courtesy of an after-the-siren goal by Gawn last weekend, and that success from the season has carried through to a host of honours at the prestigious awards night on Thursday.

Gawn, Oliver, Jake Lever, Steven May and Christian Petracca were the Demons’ selections in the All-Australian 22, with three players from the Western Bulldogs – Marcus Bontempelli, Bailey Dale and Jack Macrae – the next best represented club. Bontempelli was named vice captain of the side, to go with his fourth All Australian selection.

Other highlights of the All-Australian side included 11 first time selections. One of them, Port Adelaide’s Aliir Aliir, is the first player of South Sudanese descent to make the side, the AFL said.

The midfield of Ollie Wines, Jack Macrae and Oliver is flanked on the wings by Essendon’s Zach Merrett and Carlton youngster Sam Walsh, who had an incredible season shouldering much of the engine room load for the Blues. 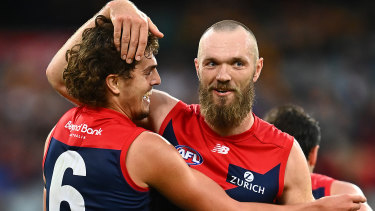 Melbourne have dominated the AFL Awards night with the Rising Star winner Luke Jackson (L) and captain of the All-Australian side, Max Gawn. Credit:Getty Images

Lance Franklin could not make a record eighth All-Australian side with the forward line pillars of Tom Hawkins and Coleman Medal winning Blues sharpshooter Harry McKay ahead of him. Toby Greene and Tom Papley were picked as the small forwards, while Bontempelli and Petracca were selected in the team as forwards.

Dale’s switch to the half-back line could not have gone any better with his selection in the 22, while Brisbane’s Daniel Rich has made his first All Australian side on the other half-back-flank after his debut back in 2009.

Full back May and back pocket Lever have both been integral to Melbourne’s rise in 2021. While both had been at the club for years, 2021 was the first time both were able to simultaneously put together a whole season and it’s gone a long way to the Demons’ success.

Melbourne’s ruck stocks could have received no greater endorsement out of the night with Gawn receiving his fifth All Australian blazer and the captaincy, while Jackson took out the Rising Star.

Jackson, who has played forward and ruck for the Demons after being selected at pick no.3 in the 2019 AFL draft, won the 2021 award on 51 votes ahead of GWS’ Tom Green (38 votes), Port Adelaide’s Mitch Georgiades (28 votes), Sydney’s Justin McInerney (14 votes) and Sydney’s Errol Gulden (11 votes).

Nine of the 11 judges who voted on the Rising Star award gave Jackson five votes, the most possible. He is the third Demons player to win the award behind Jesse Hogan (2015) and Jared Rivers (2004).

“I couldn’t have had the season I have without the support of Simon Goodwin, the entire coaching group and all my teammates who have helped to not only develop me as a person but also as a player,” Jackson said

“My family have also played a massive role throughout and I would like to thank them for all their support and guidance they have given me.”