Home » Rugby » Demons have ‘no doubt’ Jackson, Brayshaw will stay

Jackson, the emerging forward-ruck, has enjoyed a strong start to the season, and shapes as a key piece for the Demons over the next decade. However, the Perth native has attracted considerable attention from the West Coast Eagles and Fremantle.

Brayshaw, a restricted free agent, has also enjoyed a fine start to the season, with the Demons unbeaten after four rounds. He played a key role on the wing in last year’s premiership season but has spent considerable time at half-back this year.

The Demons have been able to secure Christian Petracca, Bayley Fritsch and Clayton Oliver on hefty long-term deals over the past year, while Jake Lever and Steven May are also pocketing major dollars. However, Pert says there is no reason why Brayshaw, 26, and Jackson, 20, won’t remain.

“If you look at the last [year] and our really core group of players that have signed long-term deals, there is no doubt they have taken contracts [lower] to keep the group together and I admire them for it,” Pert said on 3AW.

“You talk about Luke Jackson. Right at the moment we don’t know what he’s capable of because he just gets better and better. Angus Brayshaw is playing some of the best footy he’s ever played and he’s a superstar. I have no doubt these two players will be playing for us for a long period of time.” 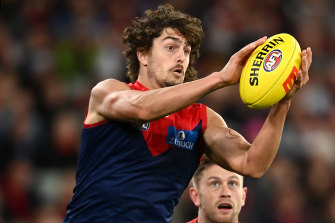 Brayshaw’s reasoning for exploring his options could revolve around a shift into the midfield. His selfless running on a wing last season was pivotal in the Demons’ rise, but he may keen to become an onballer, a difficult spot to fill in Goodwin’s team because of the depth of talent there in Petracca, Oliver and Jack Viney.

Pert said the Demons were closing in on confirming Goodwin’s contract extension, for his deal expires at the end of the season. Goodwin, 45, has been in charge since replacing Paul Roos in 2017.

“I think everyone knows ‘Goody’ is going to be coaching with us for a long period of time,” he said.

Amid debate over a new collective bargaining agreement, and whether players should brace for a drop in revenue as a result of the financial impact of the pandemic, the experienced Pert said male and female players should be prioritised.

“I look at it as an industry where the money is prioritised and distributed,” he said.

“The players, and especially the senior coaches of these teams as well, these are the guys who are putting on the show and, I don’t have any doubt, that by the time we get to the end of these negotiations those groups will be prioritised in the right way.”

He said “some of the other areas of the industry might lose some of the priority”.

“But the pool of money does keep on getting bigger, and we need to prioritise it to the right places I think,” Pert said.

Coaches are pushing for the football department soft cap to be increased. This peaked at $9.7 million in 2019 (pre-COVID) but this year is $6.5 million, impacting the salaries of senior coaches, their assistants and other personnel. AFL chief executive Gillon McLachlan has said he wants senior coaches to be paid more.