Home » Rugby » Demons made to work but topple feisty Bombers

Jack Viney said he had been looking forward to feeling the “love” upon his return to the Demons’ line-up, but he and his side were made to work for it by a feisty Essendon on Saturday night.

The Bombers’ run and carry proved a problem for the Demons but Simon Goodwin’s team was able to maintain their composure and kickstart their second half of the season with an 11-point win at the MCG. 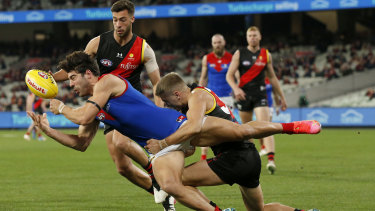 Christian Petracca and the Demons faced a tough battle from the outset against the plucky young Bombers.Credit:Getty Images

The Demons were beaten by the lowly Magpies on the eve of the bye but, having welcomed back hard-nut vice-captain Viney from injury, they ground their way to their 12th win of the campaign, ensuring a top two finish remains firmly in hand.

“It was a tough game coming off the bye. Essendon were red hot … we knew it was going to be a tough battle,” Demons skipper Max Gawn, who had pivotal touches late in the final term, said. 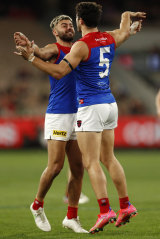 The Christians – Salem and Petracca – had a night to remember against the Bombers.Credit:Getty Images

Key defensive pillars Steven May and Jake Lever were intercept-marking kings and denied the Bomber talls the chance to be consistent threats, rebounding half-back Christian Salem was imperious with his disposal, while May later praised Michael Hibberd for holding Bombers match-winner Jake Stringer to only one goal.

Essendon midfield maestro Zach Merrett had 26 touches to half-time and finished with 41 but he had only four in the third term as the Demons took the upper hand. The Bombers did not help their cause when Archie Perkins conceded a 50-metre penalty on the wing, while the Bombers gave up another as the umpire ran back, gifting James Jordon a goal.

Clayton Oliver (34 disposals) and James Harmes (27) were midfield bulls for the Demons and Christian Petracca (26 and two goals) had an impact up forward and further up the ground in a season in which he is one of the favourites for the Brownlow Medal.

The Bombers battled valiantly in the final term but, like the Demons, could only manage one goal.

Merrett’s running mate Darcy Parish had 37 but it wasn’t enough, leaving the Bombers outside the top eight.

The off-contract Stringer has been all the rage in recent weeks at Bomberland, and his ability to enthral was evident in an otherwise grinding first term. Having taken until the 18-minute mark for his first touch, he was unlucky that his first running long shot through the corridor skidded to the left. However, there was no mistake with his second when, having received a handball from Anthony McDonald-Tipungwuti, he converted on the burst from 50 metres. It sparked his side into action, and the Bombers had an unexpected lead when Devon Smith converted after the quarter-time siren. The Demons had a 17-7 advantage in inside 50s to that point.

One of the more inspired coaching moves this season was Ben Rutten’s decision to shift veteran Dyson Heppell from the midfield to half-back. The Bombers’ skipper has embraced the change, and it’s allowed him to reboot his career. Heppell’s composure and class with the ball has been obvious, and he had an intercept mark and 11 touches in the first term. He tried to will his side back into the contest in the third term with a clever snap, ending a four-goal Demons’ surge.

Demons forward Luke Jackson had a brain fade in the second term when he marked 10 metres from the goal line and played on, only to dribble through a left-foot point. He made amends minutes later when he ran into an open goal, the first of two majors for the Demons, as they regained the lead.

Keeping up with the Joneses

Veteran Demon Nathan Jones returned to the side as the medical substitute, having played his last senior match against North Melbourne in round seven. He spent the night on the pine, and his best chance of a fairytale end to his career come September appears to be as the sub.