Carlton great Greg Williams is among the victims of the AFL's coronavirus crunch, with the Blues informing the dual Brownlow Medallist that there won't be room for him or several other specialist coaches when football resumes after its indefinite recess. 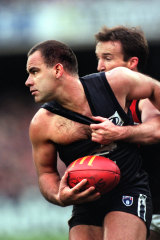 Industry sources confirmed to The Age on Sunday that part-time skills coach Williams, goalkicking coach Saverio Rocca and ruck coach Hamish McIntosh had all been laid off in the wake of the coronavirus crisis. While around 80 per cent of AFL and club staff have been stood down indefinitely while football is on hiatus, Carlton have taken the added step of informing their specialist coaches that there will no longer be roles for them at the Blues even when the game returns.

Next generation academy manager Zac Dawson – the former Hawthorn, St Kilda and Fremantle defender – and two of Carlton’s full-time recruiting staff have also been advised that there will no longer be positions for them at Ikon Park.

The Blues also made the agonising decision to end their funding of the Northern Blues VFL program, leaving coach Josh Fraser among those out of work and effectively ending the 138-year history of what had formerly been the Preston Football Club.

Williams, 56, took up the skills coach role with Carlton last year after having held a similar position at Essendon.

Williams – a member of the VFL/AFL team of the century – told the Carlton website late last year that he was enjoying his work with the club at which he played 109 games and won a best and fairest, Brownlow, Norm Smith Medal and was a 1995 premiership player.

“The way you practice and put pressure on yourself and your technique, you’ve got to be able to do things flat-out.

“We’re working on all of those things. They’re on the right track.”

Former North Melbourne and Geelong big man McIntosh took over as Blues ruck coach in late 2018 while ex-Collingwood and Kangaroos spearhead Rocca took up a role at Carlton in 2015, working with Levi Casboult to straighten the wayward forward’s goalkicking.

In a letter to Carlton members late last week, Blues chief executive Cain Liddle noted that these were extraordinarily trying times for the club, but remained upbeat about the Blues' future.

"The reality is that we have faced adversity on many occasions before, and not only survived — but flourished," Liddle wrote.

"Nothing will be different this time around … we are very lucky to have the members that we do."

There could barely be a person in the AFL ecosystem who isn't feeling the hit of the virus. Among those affected are the players, whose union – the AFL Players' Association – reached an agreement with the league on Friday whereby players will forfeit 50 per cent of their base payments until the end of May, 70 per cent thereafter until games resume, and then 50 per cent again if matches get back up and running this year.

The AFLPA told players in an email on Friday that the union's "major concern was the risk of players being stood down without pay, which was a very real possibility given the uncertainty in the industry."

The email also said that the AFLPA would soon develop criteria for the $500,000 financial hardship fund established to help players through the unprecedented situation.