Melbourne stalwart Nathan Jones has officially called time on his AFL career, informing his teammates of his retirement via video call.

Jones, who left the Dees’ hub in WA after their preliminary final win to return home for the birth of his twins, has been on the fringe of the Melbourne side.

The 33-year-old former captain played 302 games for Melbourne across a 16-year career and won the best and fairest three times.

Knowing he was unlikely to get a fairytale recall to the grand final side, he decided to return home and made it with hours to spare before the birth of his children.

He said he was disappointed to miss the decider but was proud of his club.

“Personally I’ve had a lot of emotions go through my mind from how it’s all unfolded. From an individual perspective, it’s been disappointing, to say the least, knowing the work I’ve put in,” Jones told Melbourne media. 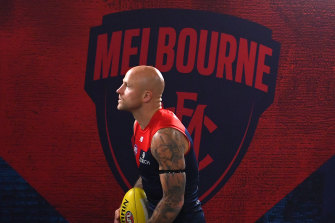 “But what I want to stress is that regardless of that I am still filled with the utmost amount of joy, happiness and pride for the position the club is now in.

“Over the years, the two things that have driven me to stay committed to this footy club have been firstly, the chance to play in a premiership one day and secondly, to ensure that no young player coming into Melbourne would have the experience I did for many years, I wanted to leave Melbourne Football Club a better place.

“Looking at where the club is now, I am proud of where we are and I’m so excited for the opportunity that my teammates have ahead of them, to write a new chapter in the club’s history.”

“One of the hardest things to do as a player is go through cultural change,” Goodwin said to the playing group following Jones’ announcement.

“And we’re talking about a culture that was at rock bottom.

“He’s seen that journey through and he leaves the club today a proud man.”

Demons made to work but topple feisty Bombers