The Bulldogs have taken another step towards the club’s sixth wooden spoon and narrowly avoided breaking another unwanted record after falling 34-6 to the Titans.

Trent Barrett’s side need a near miracle to fight their way off the bottom of the ladder like they did last year. The 28-point defeat was a procession for a Titans team which has been the epitome of inconsistency this season. 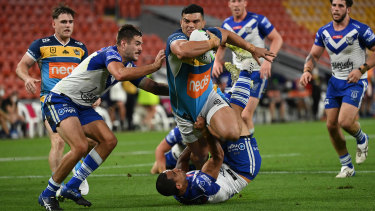 The Bulldogs have now lost six consecutive matches and only just avoided becoming the first team in NRL history to be held scoreless in five matches in a season.

It would take a brave punter to back the Bulldogs to stave off that record in the final five games of the season as this team has shown itself to have little strike power and is looking like ending up as one of the worst attacking teams in history.

Their play features a mind-numbing amount of structure. It’s predictable at every turn.

Barrett desperately need players that can provide spark and win one-on-one battles against their opposite number as he has not been able to bring the attack he helped build at Penrith to Belmore.

The Bulldogs are also in desperate need of some new halves.

While their forward pack front up, they’re let down by poor fifth tackle options at the end of almost every set.

When Kyle Flanagan and Jake Averillo do take the smart fifth tackle option, their accuracy is often awry.

The pair spent the first half trying to send cross-field kicks to Jayden Okunbor but barely created a contest for their tall winger.

The kicks were either too shallow or from too far out, allowing the Titans to diffuse the situation with ease. 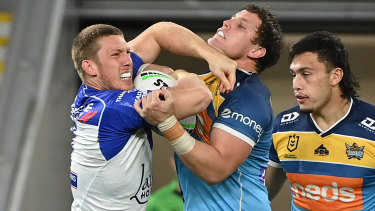 Jack Hetherington and Jarrod Wallace get into some push and shove.Credit:NRL Photos

At the other end, the Dogs also looked clueless in defence. Ash Taylor played one of his better matches and he was aided by rookie Toby Sexton.

Tino Fa’asuamaleaui, Esan Marsters and Brian Kelly set up a 16-0 half-time lead and in the second half, with a jump to seventh on the ladder on the line, Greg Marzhew, Taylor and Kelly all crossed.

“We expected a big game but we needed the two points and we got it done,” Titans fullback AJ Brimson said.

“We haven’t been consistent this year and we haven’t been going well but I think we’re in the eight now. We took a lot of confidence from this game.”

Only Bailey Biondi-Odo burrowing over from short range in the final 10 minutes stopped the Bulldogs from the ignominy of their fifth scoreless match of the season.

With five games to play, the Bulldogs trail the 15th placed Broncos by six premiership points.

In their run home, they will face the Tigers twice alongside the Warriors, Knights and Sea Eagles.

It’s hardly a horror run but if they play like they did against the Titans, they won’t improve upon the two wins currently next to their name at the bottom of the premiership ladder.

Busted All Blacks forced to apologise