Jackson’s contract runs out at the end of the year, and he faces a huge decision about whether to re-sign with the Demons, or return home to Western Australia with either Fremantle or West Coast. 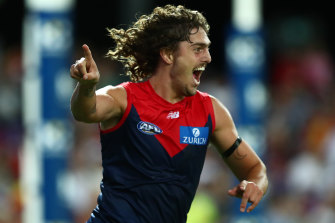 If Jackson did decide to leave the defending premiers, Fremantle appears his most likely destination given the club’s flag window has just opened.

In contrast, West Coast face a long and painful rebuild as they transition out a host of ageing stars.

The talk of Jackson’s future is one of the hottest topics in the AFL, but Longmuir was in no mood to discuss any specifics when asked about it on Wednesday.

“It’s not my job to talk about those sorts of things publicly. I’ve probably done that in the past with certain players and regretted it straight away,” Longmuir said.

“If the shoe was on the other foot I wouldn’t want opposition coaches talking about my players that way. It’s not really for me to publicly comment on.

Meanwhile, Longmuir is leaning towards giving Matt Taberner a second straight match in the WAFL rather than playing him in Saturday’s crunch clash with Carlton at Marvel Stadium.

Taberner booted three goals and took eight marks for Peel Thunder last week in his return from a back injury.

The 29-year-old has been restricted to six matches this season due to hamstring and back issues, and Longmuir wants to make sure Taberner is fully fit and match hardened before he returns to AFL ranks.

“We can manage his game time (if he plays in the WAFL), it’s a slightly lower intensity, and he doesn’t have to get on a plane,” Longmuir said.

“He’s one of our more important players and I think he’ll have a real impact for us.

“We’ve just got to get him out there consistently and give him that continuity.

“We’re still working through the best way to do that. I see him as a really important part of the plan going forward.”

The Dockers will be bolstered by the return of goalsneak Michael Frederick from his club-imposed ban for drinking alcohol during a six-day break.

But Blake Acres (hamstring) and Sam Switkowski (back fracture) go out of the side.

Longmuir is hopeful Switkowski will be able to play again this season.