When the league-leaders take on the fourth-from-the-bottom side in the dying weeks of the season, the chances of an upset are slim. One team has everything to play for, the other has nothing, save for pride, and probably can’t wait for the campaign to end.

Thus it proved when the table-topping Western Bulldogs faced the struggling Crows in the early game on what turned out to be a much-disrupted Saturday, where very little ran to schedule. 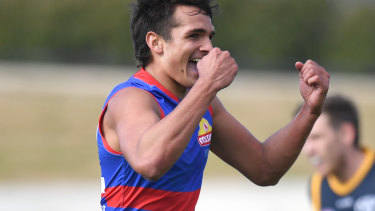 Bailey Dale was the creative fulcrum for the Bulldogs, Caleb Daniel and Bailey Smith aided and abetted their teammate, and boom youngster Jamarra Ugle-Hagan showed, with some excellent touches, why there is so much excitement about him.

It was clear and bright, cool and crisp in Ballarat. But it was also breezy, with a wind blowing that those at ground level reckoned was worth three to four goals.

So, when the Crows started off with the wind in their favour, it was essential that they used it to their advantage: after all, they have been bumping along in the wrong half of the ladder, while the Bulldogs are riding high on top of the ladder and enjoying their best season since that against the odds Premiership in 2016.

And when they got off to a flying start by kicking the first two goals of the match through Elliott Himmelberg and Darcy Fogarty, it looked as though they might well be able to make the most of the blustery conditions and lay the foundations for an upset. 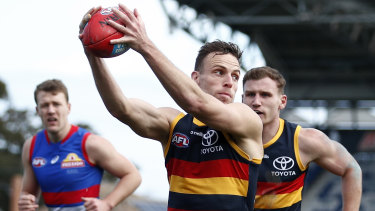 Brodie Smith in action for the Crows.Credit:AFL Photos

However, it turned out to be illusory, especially as some profligate kicking began to cost them dearly once Tom Liberatore had kicked the Dogs’ first goal and got them on the scoreboard.

Despite kicking into the wind, the league-leaders began to assert themselves. Josh Bruce kicked two goals in the opening term – one after an excellent high mark in the goal square – while boom newcomer Ugle-Hagan created space beautifully with a spin and turn before passing to Jason Johannisen , who was able to gallop unchallenged towards goal before converting.

So, when the quarter-time siren blew and the scoreboard showed the Dogs with a 12 point advantage – 5.3 (33) to 3.3 (21) – there was already a sense of inevitability about the outcome.

The Bulldogs, this time playing with the wind, wasted little time in cementing their advantage despite the fact that Fogarty kicked the first goal of the second quarter (his second for the match) to give the Crows hope. 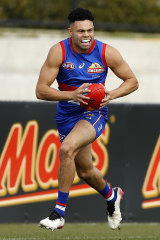 Aaron Naughton replied quickly, Tim English kicked truly to push the lead out to 20 points, and the Dogs began to assert.

That’s not to say the Crows were poor. They hung on as best they could, defending in depth, trying to crowd the Dogs’ forwards and deny them space and ensure they were competitive at every contest.

But class continued to prevail and Ugle-Hagan added to his first quarter goal with a second and Caleb Daniel twisted, turned and drove through the gaps in the Crows’ rearguard to drive home, marking the Dogs fourth goal in a row.

Although the Crows were hanging tough, the half-time lead had blown out to 34 points and the Dogs knew they only had to manage the second half to pick up all four points.

Running down the clock and racking up possessions

If the Crows were ever going to make any inroads, the third quarter, with the breeze at their backs, was going to be their opportunity.

The fact that they could only kick one goal and two points says it all about the way the Dogs dominated, if not on the scoreboard (they managed only one goal three points themselves) but in general play, where they restricted the visitors to very few opportunities. Dale, Daniel, Bailey Smith, Jack Macrae and Tom Liberatore all enjoyed themselves, racking up possessions in the midfield.