For all that had changed in the world since footy fans last attended a game at the MCG, two truths still stood up by 10.15pm on Thursday night: Carlton still can’t beat Richmond, and Dustin Martin is still incomparable. 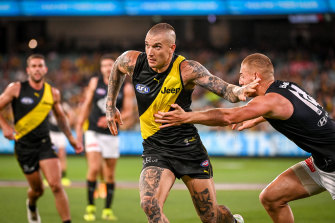 Dustin Martin was incredible as ever as the Tigers beat Carlton in the AFL season opener.Credit:Eddie Jim

The Blues huffed and puffed and threatened to blow the Tigers’ house down, but Richmond – as they almost always have over the past four years – showed their fortress is made of very sturdy brick. Several times throughout the night Carlton looked half a chance of kicking away, but they never did. Instead, they kicked themselves out of the game, with their 2.6 in the third term proving costly as Richmond steadied to record their 11th straight win over the Blues.

Martin’s status as a Tiger immortal is already secure and this showing only enhanced his already ridiculously high reputation. The three-time Norm Smith Medallist won a heap of the ball but it was a handful of small yet telling contributions that turned the game.

There was a trade-mark fend-off goal during the second term, an ingenious tap to the advantage of Jake Aarts which set up a Jack Riewoldt goal in the third quarter, a strong mark and goal early in the last, and then another involvement to set up a second goal for Aarts after Carlton closed to within a goal deep into the final term.

Still, he wasn’t done, leading the Blues on a merry dance to dish off to Shai Bolton who put icing on the cake in the dying minutes and then taking another incredible mark after that. Back able to shout en masse in person, the Tiger Army roared “Dusty, Dusty.”

Sam Walsh was outstanding for the Blues but Richmond won more of the key moments, with a desperate Jayden Short effort to stop a Harry McKay goal in the third term among the most important.

There was enormous intrigue as to how the new medical substitute rule – implemented at the 11th hour – would play out. Things changed further on game day when the Tigers lost captain Trent Cotchin to injury, replaced in the 22 by Marlion Pickett, which led to Jack Ross being named as the designated 23rd man. It was former Melbourne defender Oscar McDonald however who made history, replacing the injured Jack Silvagni (shoulder) at half-time.

McDonald, playing forward, made an almost immediate impact, matching his career goals tally in 81 games with the Demons inside four minutes on the ground as a Blue. So recently was McDonald added to Carlton’s list, they didn’t have his headshot on file to use on the ’G big screen.

Remarkably a player who didn’t have a list spot as recently as last week took advantage of a rule that didn’t exist until this week. Ross was introduced late in the third quarter after Nick Vlastuin hurt his ankle.

Stand by your man

It was always going to be a talking point, and unfortunately for Blue Sam Petrevski-Seton, he is now the answer to a footy trivia question. It was deep in the second quarter when a bouncy Petrevski-Seton strayed from his position on the mark to become the first premiership season victim of the new “stand” rule. Tiger Josh Caddy took full toll from the ensuing 50-metre penalty.

It was the culmination of a frustrating period in the game for Carlton, with Ed Curnow entering into the protected area earlier in the quarter and conceding 50 metres to Jack Riewoldt, who duly slotted his first major of the season. Blues fans had also been left aggrieved after a brilliant chase-down tackle from Silvagni on Kamdyn McIntosh went unrewarded.

The first moment to reignite the senses came early in the first term when a late-arriving McKay came in to flatten Vlastuin in an aerial contest.

Vlastuin thankfully bounced back up but the overwhelmingly pro-Tigers crowd made its displeasure clearly known. Nature was healing. The fans weren’t the only ones who remonstrated, with the blow to Vlastuin triggering scuffles which are likely to provide a welcome boost to the league’s coffers.

Richmond backman David Astbury had his number taken midway through the third term for a crude elbow to Lachie Plowman, who converted the resultant set shot for his first AFL goal since 2013.