It wasn’t so long ago that Mason Fletcher was still harbouring dreams of becoming a third-generation Essendon player.

As he was running around for the Calder Cannons in the NAB League in 2019 as a mature-age 19-year-old, following in the footsteps of his famous father Dustin and grandfather Ken by becoming a Bomber was the goal, for a period of time, at least. 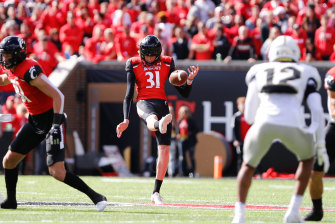 Mason Fletcher punts for the Cincinnati Bearcats during a college football match this season against the UCF Knights.Credit:Getty Images

Sometime during that season, though, the plans for the family dynasty continuing at Tullamarine were put on ice.

Young Mason had fallen out of love with Aussie rules, and caught the American football bug.

“He had a good friend from school go over [to America] and do the program 12 months before him and he got picked up by Texas A&M which is a massive college obviously in America.

“He [Mason] saw how that worked and when I dropped him out there at Waverley for the first kicking session [with ProKick Australia], he was straight out of the car and he was keen to get into it, so it started really from there.”

Mason is now preparing for the second biggest game on the college football calendar and one of the biggest stages in US sport. 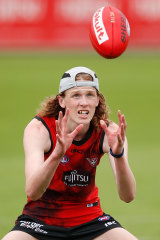 Just 12 months after deciding to chase his dreams on the other side of the world, the 21-year-old finds himself as the punter in the team responsible for one of the greatest Cinderella stories in American collegiate sports history.

Against all the odds, Mason’s undefeated Cincinnati Bearcats (13-0) will be aiming to qualify for the College Football Play-off National Championship game when they face the Alabama Crimson Tide on New Year’s Eve (US time, New Year’s Day AEDT) in the Cotton Bowl Classic semi-final match at the Dallas Cowboys’ AT&T Stadium.

After winning the American Athletic Conference championship game against the Houston Cougars earlier this month, fourth-seeded Cincinnati became the first team to reach the final four from a non-Power Five conference since the current post-season format was introduced in 2014.

Mason played one of his best games against Houston, and Dustin couldn’t have been prouder of his son.

“Starting punter as a true freshman is a good effort in itself, but to be part of that program under [head coach] Luke Fickell, they’ve had a fantastic year and they’re the only undefeated side in college footy,” Dustin said.

“No one’s ever done it from Cincinnati so it is big … I don’t think they’ll die wondering, Cincinnati. They’re a pretty well-drilled team and they’ll have a real go at beating Alabama.”

Seeing Mason become part of a history-making side so soon after heading to America made the experience even more surreal for Dustin.

“Not only have Cincinnati had to win games, they’ve been trying to win games by bigger margins too, to keep their rankings going up and up,” the two-time All-Australian said.

“When you’re the hunted, especially in their conference and the games they’ve played, it’s tough enough to win, let alone to try and win by a certain amount of points.”

Following Cincinnati’s win over Houston, Mason tweeted a text exchange with his mother Suzie who said Dustin felt happier watching his son triumph than when he won premierships with Essendon in 1993 and 2000.

“A lot of people have said, ‘Is that really the case?’ It’s just how I felt at the time,” Dustin said.

“My footy career is in the past now and I loved those times at the footy club, and for me to play in two premierships was no doubt one of the best feelings I’ve ever had.

Despite having one of the biggest kicks in the AFL for over 20 years, Dustin’s attempts at giving Mason advice have largely fallen on deaf ears.

“I probably do give him a few tips, but I’m not sure if it’s the right thing to tell him,” Dustin said.

“You can relate to it a little bit even though the balls are a lot different … you’ve got to make sure you hit them.

“The sweet spot is probably a little bit smaller than an AFL ball, especially when you’re kicking a spiral.

“He’s never listened to me too much so that won’t change now.”

Given Mason will be punting in one of the world’s biggest indoor arenas on New Year’s Eve in a controlled environment, Dustin was expecting another good performance from him.

“He’s got no excuse if it’s a bit cold or windy or snowing outside,” he quipped.

And unlike his old man, who played most of his AFL career as a wiry beanpole, Mason has managed to put on weight a lot quicker. In his short time with Cincinnati, he has beefed up from 75 kilograms to 92kg – Dustin’s playing weight in his final year at the Bombers as a 40-year-old.

“Americans do it a bit different but Mason I think actually enjoys being in the gym,” Dustin said.

“I didn’t enjoy the gym, I’d just much rather duck the gym and get out there and kick the footy around out on the ground.

‘You want to achieve the highest of the sport and for college football, to play in the NFL is a big deal, so he’ll want to give that a try.’

“He’s had to work hard, there’s no doubt about it, but he’s enjoyed the experience of being in the gym and putting on weight and getting a bit stronger through the core because if he’s going to go on, over the next 3-4 years he’s going to have to do all those things.”

An NFL career is certainly the end goal for Mason.

“You want to achieve the highest of the sport and for college football, to play in the NFL is a big deal, so I think he’ll want to give that a try,” Dustin said.

Mason will soon be joined in the college football system by brother Max, who has accepted a full scholarship with the Arkansas Razorbacks next year.

While Dustin admitted he would be “over the moon” to see Mason or Max play for Essendon further down the track, for now, he was happy watching them both play college football, especially considering Mason’s Bearcats wear the Bombers’ red and black colours.

“It’s funny how it works, isn’t it? They’ve chosen a bit of a different path but it’s obviously one we can relate to,” the 400-game champion said.

“Even though it’s college, it’s professional sport with regards to the system they’re in.

“But you’ve got to put in the hard work to get the ultimate success.”