Home » EGM not the answer: Major Magpies sponsor weighs in on club unrest

The head of one of Collingwood’s major sponsors has called for people agitating to bring about board changes at the Magpies via an extraordinary general meeting to put the interests of the club and its players ahead of personal agendas.

The CEO and president of La Trobe Financial, Greg O’Neill, said he appreciated that many Magpie members had legitimate concerns after several headline-grabbing events in the past six months, but he hoped common sense could prevail. 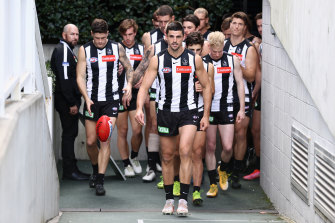 “All good member-based organisations find ways to work these matters out and Collingwood will too because they are a great club,” O’Neill said.

“At present, there are several vocal, dissatisfied members, who have genuine concerns for the club’s future, who feel they don’t have a voice and want to be heard.

“It’s about getting all these parties together around the same table and listening to those concerns and then reaching a consensus for the benefit of the club and not for any singular individual’s agenda. The club and its athletes must be first priority.”

O’Neill speaks with authority on such matters, having been chairman of the dominant Melbourne Tigers basketball club for five years between 2005-9. He is currently chairman of the Australian Basketball Players’ Association, who represent the country’s men’s and women’s national team players.

La Trobe Financial, which has $12 billion of assets under its management, has been a major sponsor of Collingwood since 2015 with their confidence in the club’s direction clear as they recently extended their deal by four years. Along with Nike and Emirates, they are one of the club’s three premier partners.

Korda replaced Eddie McGuire as president in April after McGuire’s 23-year reign came to an end in February when he mishandled the release of the Do Better report, which found the club guilty of systemic racism.

McGuire has made it clear that he does not think extraordinary general meetings are good for AFL clubs – which was reiterated recently by Korda, who has spoken to Browne and said he would not step down as Pies president – and was able to avoid elections for positions on the board during his tenure as president.

Three current board members will be up for election at the end of year with eligible members able to vote for candidates.