The Fast Show: England star Jonny May has edge in speed over Wales speedster Louis Rees-Zammit as Gloucester wingers get set to go toe-to-toe in the Six Nations

Jonny May and Louis Rees-Zammit are the fastest wingers in the west ready for a Six Nations duel next Saturday.

The Test in Cardiff will pitch Wales against England, red against white, youth against experience, Gloucester against Gloucester and pace against pace.

After the pair’s sensational scores last time out – May’s extraordinary hurdle versus Italy, and Rees-Zammit’s banana-kick chip-and-chase to beat Scotland – we are set for a box-office showdown between the wonder wings. 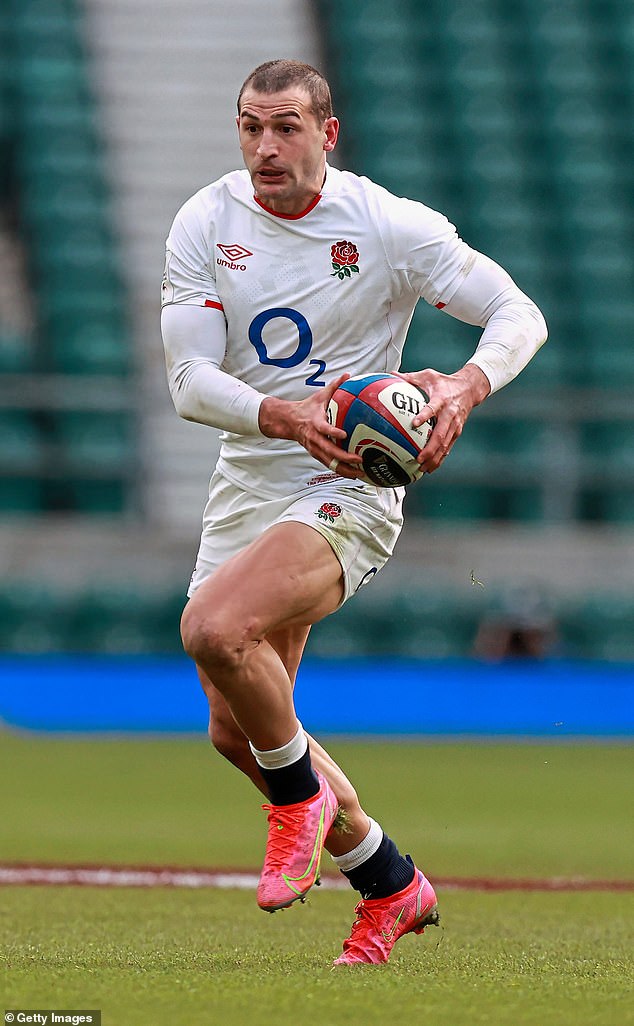 Both leave scorch marks in their wake but the question on lips either side of the Severn Bridge is: who is quicker?

‘Zamm,’ Matt Banahan, who plays with both at Kingsholm, reveals to Sportsmail.

‘Jonny is more elusive, and has got good high-end speed, but Zamm is gas, rapid. I’ve never run as fast as him – I’ve only gone that fast in car!

‘His “go” is unbelievable. When I train against him I just show him the outside – “take it, I’ll let someone else chase you!”’

While rugby’s speed statistics are often shrouded in secrecy it seems May, 30, is actually a shade faster than 20-year-old Rees-Zammit.

In the 78th minutes against Saracens last season Rees-Zammit hit 10.5 metres/second – as measured by the GPS monitor all players wear in their shirts – or 23.48 miles per hour. 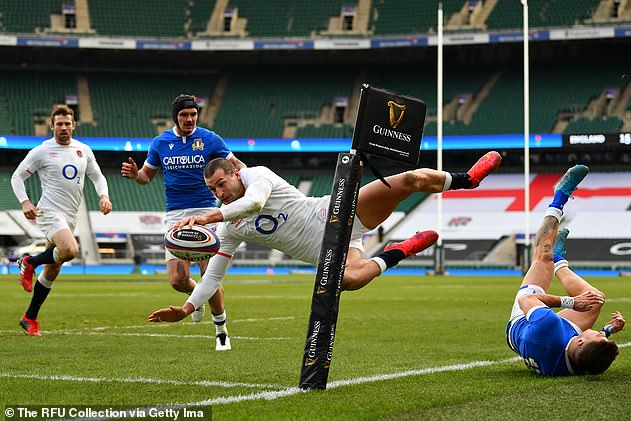 ‘On a good day I can just about keep up with Louis,’ smiles May himself.

May and Rees-Zammit are speeding up too.

Until recently the Welshman did not work on his sprinting, relying on natural talent, but now joins May – who once worked at Olympic legend Michael Johnson’s training centre – honing his skills with Gloucester’s strength and conditioning coach Dan Tobin, himself a former sprinter.

Tim Taylor, who played with May at Gloucester a decade ago and is now the academy backs transition coach, sees two differing styles between the wingers.

‘When Louis is on a straight line he has out-and-out pace,’ he tells Sportsmail.

‘Jonny has the ability to stop-start on the mark, which is so hard to defend.’

While their pace is comparable May and Rees-Zammit are quite different players and characters. 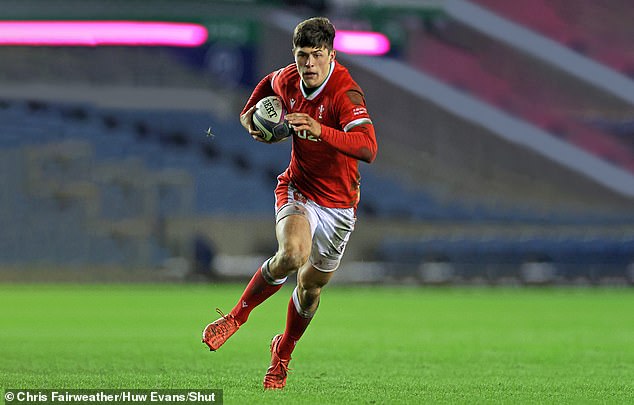 May, 30, has actually been recorded as a shade faster than 20-year-old Rees-Zammit (above)

May, England’s second-top try-scorer of all time, has curbed the craziness of his youth to become the ultimate professional.

‘If he was a wild horse when he first came on the scene, he’s very much tamed now!’ explains Gloucester winger Charlie Sharples.

‘Some of the tries he scored were having gone on these mazy runs, going through a whole team. He didn’t even know where he was going, but had a great athletic ability and that rogue element to his game. He doesn’t do crazy things any more.

‘Every facet he’s worked hard at. He has moulded himself to be a high-quality international winger

‘Jonny has always had a compulsive nature, being able to do something religiously, feeling like he has to.

‘Rugby is his life, and you have to admire that. It pays dividends for him. 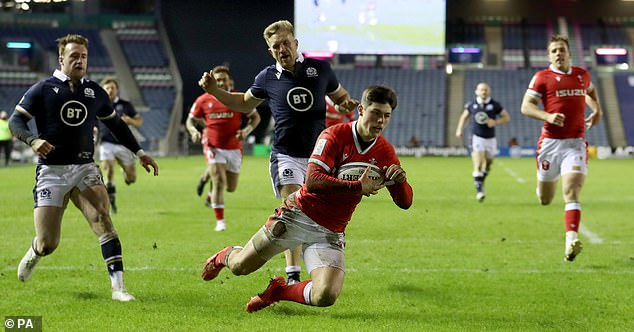 ‘Jonny is about marginal gains, one per centers, oxygen chambers – all that preparation is as much about mental as physical preparation.

‘He leaves no stone unturned that’s for sure. Louis is more laid-back.’

As the senior man recovers in his hyperambic chamber, or stretches for hours to the timing of his wristwatch, Rees-Zammit has teenagers on TikTok swooning over him – many scrambling to tell him they were free on Valentine’s Day after his try-scoring feats in front of millions on terrestrial television.

The protégé works hard too, but pre-Covid visits to watch Manchester United at Old Trafford, and rounds at the golf club with his brother and house-mate, Taylor, allow Rees-Zammit to switch off when he is not embarrassing defenders.

‘He’s got a rounded personality and is not suffocated just by rugby. It’s nice to know he has opened his doors to other stuff – some young sportsmen can live and breathe it too much and if it doesn’t go right you don’t have an outlet.

‘He’s really only been on the scene, when you take into account the Covid breaks, about a year. You can see what he’s achieved already; speed can get you a lot of tries.

‘He’s closer to my son’s age than mine! I sat with him in the gym this week and said “how many caps have you got Zamm?” “six” “how many tries?” “four”.

Rees-Zammit is making everyone feel old. Born in 2001 when Atomic Kitten were No 1, he once went out with Paul Scholes’ daughter – the former United midfielder even trying to convince him to play for England.

The Penarth-born flyer has only played 34 professional matches, six of them Tests, and is already a star tipped for the Lions. Taylor remembers first watching him.

‘We had an A-League game against Bristol away on a Monday night,’ recalls the coach.

‘Louis was on the wing, caught a kick-off and went the length of the pitch and scored – we went “woah, this kid’s got something”.

Sharples adds: ‘He’s got that confidence you can’t teach – that air. He backs himself.

‘Watching him over the past 12-18 months it does seem like everything he touches turns to gold.

‘I worked with him last year in his first season and asked him “what are your aspirations?” He said “I want to play international rugby and for the Lions”.

‘For an 18 year old to have that confidence, that vision of where they want to go was great.

‘The world is his oyster. There aren’t many players I’ve seen that are that physically talented. He’s bulked up, as you would expect from someone between 18 and 20, but he always had a massive set of quads, raw speed – characteristics you need for a world-class winger.’

‘I’ve given him so much banter about his kicking,’ says Banahan.

‘But you saw against Scotland he hit a banana kick!

‘Straight after the game I said: “luckily it didn’t come off your shin like normal!”

‘He said: “Well I have been working on it as you’ve been getting into me!”’

At Kingsholm they believe May has the more athletic leap for a high-ball, Rees-Zammit is a more natural footballer, but in the west country and beyond all are drooling over their match-up when England travel to Wales.

It’s mazy May against Rees-Lightning, master against apprentice. Get ready for the fast show.