NSW Police Commissioner Mick Fuller says he is “not disappointed” at being blocked from joining the board of the Australian Rugby League Commission.

NSW Premier Gladys Berejiklian and ARLC chairman Peter V’landys both rang NSW Police Commissioner Fuller on Sunday to inform him he would not be allowed to join rugby league’s top table on “legal advice”, believed to relate to the payment of a $75,000 director’s fee. Fuller had already pledged to donate the money to Police Legacy. 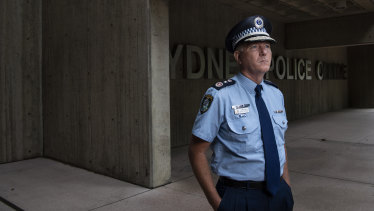 Police Commissioner Mick Fuller has been blocked from joining the ARL Commission.Credit:Louise Kennerley

The U-turn came after V’landys had met key NSW government officials on seeking formal approval for the state’s top cop to join the ARLC, which will hold its AGM on Friday.

“At the end of the day I’ve got to protect my primary role, it’s the most important role.

“It doesn’t mean I wouldn’t assist rugby league or any other code going forward. I wish them well and I’m sure they will find someone suitable to replace me. 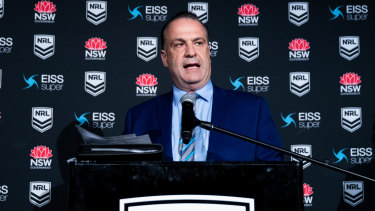 Peter V’landys was on the verge of a coup to get NSW Police Commissioner Mick Fuller to join the ARLC.Credit:SMH

“Everyone gave it a good crack and it didn’t come off. I still see sport as such a huge community plus for NSW and would continue to work with any code like I have during COVID.”

V’landys, meanwhile, says he is more determined than ever to transform the perception of rugby league players among corporate Australia despite the Fuller ruling.

“Out of every negative there’s a positive and the positive here is we’ve got the message out there that the one per cent that do the wrong thing are on notice,” V’landys said.

“Ninety-nine per cent of the players are fantastic. If I call one and say there’s a kid doing it tough in hospital, within minutes they’re there. It is the one per cent that let everyone else down.

“Even though we weren’t able to get Mick Fuller it’s not going to affect the determination to get it fixed.”

“I think there’s a real balance between the fines and the amount of time [players] spend off the field because the game has multiple stakeholders – the fans, the clubs, the sponsors, and the players themselves,” he said.

“It’s a complex thing but at the end of the day a handful of players get it wrong but everyone gets punished.”

Fuller said he might consider a role with the ARLC once he finished his stint as police commissioner.

“If there are other opportunities and that was allowed within my full-time employment then I’d probably jump at the chance but certainly leaving to just do something like the commission role wouldn’t be on my mind,” he said.

The NRL said in a statement on Sunday it “respects and understands the NSW government’s advice on the matter”. The Herald on Saturday revealed Fuller had personally signed off on a recommendation to stop a former officer from serving on the board of the Cronulla Sharks in 2015, claiming the role was an “extraordinary to high risk” for the NSW Police Force.

The vacant ARLC role won’t be filled before the AGM with a Queensland bloc pushing former Howard and Turnbull government minister Mal Brough as a contender.

V’landys is believed to be wanting a candidate with either a marketing or regulatory background, hence his pursuit of Fuller, who came with the recommendation of Phil Gould.

From a flag to the fourth division: Rance ponders footy comeback in Perth