Home » Rugby » Except for Hunter Clark’s jaw, nothing has changed

Five days and countless broadcast hours, column inches and social media pixels later, we’re none the wiser. It had been anticipated that the David Mackay tribunal hearing would deliver us to a new threshold of understanding of where a footballer can and can’t go.

Instead, it left us jogging on the same old spot. The status quo was validated. The tribunal comprises three ex-players, in this case David Neitz, Richard Loveridge and Paul Williams. Historically, they’ve spared little sympathy for players who cause injury, knowing fudges and excuses when they hear them. 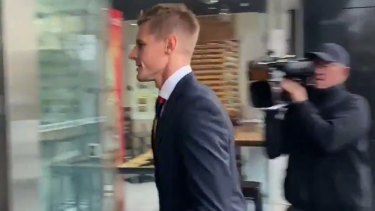 This time, they concluded Adelaide’s Mackay and St Kilda’s Hunter Clark had arrived simultaneously at a contested ball with the same honest intentions, and so the facial injuries sustained by Clark had to be put down as an unfortunate accident.

The most that will ensue is heightened awareness on the field, but history teaches that will be transient.

Mackay’s stance was that he had eyes only for the ball, did not deviate from it, did not run past it, did not target Clark and did not tuck in his shoulder, but reached for the ball with both arms and would have got there first but for teammate Sam Berry’s bump on Clark that nudged him forward into the ball and Mackay. There was four one-hundredths of a second in it. Without it, it might have been Clark rather than Mackay that was charged with rough conduct.

The AFL’s position was that Mackay came off a long run at high speed at a vulnerable player and became airborne as they collided in what became a bumping motion. “The rules and guidelines contemplate that you can contest the ball and still commit a reportable offence,” said the AFL’s Jeff Gleeson.

Both Gleeson and Mackay’s advocate Andrew Culshaw sought to provide a bigger picture context. Gleeson said a player always had options when approaching a contest and that the bravest of them sometimes took the more prudent path. To think that there was no alternative was to licence future spinal injuries, he said.

Culshaw said that a player had the right to protect himself in a contest as long as his technique was sound, as Mackay’s was. To ask players to second-guess themselves in split-seconds was to open the game up to more head and facial injuries of the kind suffered by Clark, not less.

The axis was the phrase used in the charge hastily entered by the AFL after the match review panel failed to lay one, “reasonable in the circumstances”.

“Even if you conclude that (Mackay) was entirely contesting the ball, and not a shadow of a bump, it was still unreasonable,” said Gleeson. This is the reformists’ standpoint. Replied Culshaw: “There is nothing unreasonable about a player going hell for leather at a 50-50 ball. David Mackay’s conduct was not even close to unreasonable.” This is the traditional view.

They agreed only that this was not a test case for a new rule. The rough conduct charge had always been on the books, said Culshaw. It was just that it was re-interpreted between Thursday and Saturday nights. Gleeson said the operative word was “circumstances”. The circumstance of each case was unique, not the rule governing it.

Here, really, was the nub. Justice done or not, all that was proved this night was that if there is to be cultural change in the way the game is played, the tribunal is not the place to enact it. It could only ever arrive at a verdict, not a position or a policy. And its verdicts do not act as precedents as in common law.

So we finished where it started. Either we accept that this was the sort of accident that happens periodically in footy with all its inherent risk, or we start now on a proper, binding and sustainable fix.