In 2020, one of the most influential figures in North Melbourne’s modern history, Ron Joseph, warned that while the club had won the battle of the Gold Coast, the battleground had shifted to Tasmania and the imminent threat of relocation to the Apple Isle.

“Now it’s the battle of Tasmania, and that is well and truly on,” Joseph told The Age.

Joseph was referring to North’s successful fight to remain south, at Arden Street, rather than accepting an AFL shove – promising money, players, a stadium and so forth – to relocate to the Gold Coast. He was one of the fiercest and most effective warriors against the Gold Coast push, assisting James Brayshaw’s takeover of the board in 2007.

North have seen off a number of attempts to nudge the club to another market. In 2010, there was a possibility that the Roos could play seven games in a mix of Hobart and Launceston – essentially picking up Hawthorn’s games, an option the AFL favoured – but Hawthorn’s Jeff Kennett out-flanked the AFL by exploiting the north-south divide in Tasmania and retained Hawthorn’s share.

Today, after the release of the Colin Carter report on Tasmania’s bid for an AFL team, North face a familiar public discussion about the club’s future. 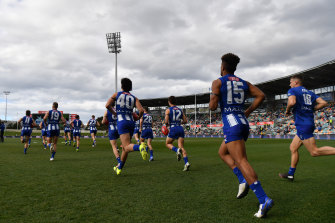 The Kangaroos take to the field in Hobart two weeks ago.Credit:Getty Images

Implicitly, the Carter report and the Tasmanian premier’s aggressive stance on Tassie’s need for a team have issued North with a choice, if not in 2021 or even 2022, then in the near future: either develop an exit strategy from Tasmania – which means finding an alternative to the $4 million gross revenue that the state provides ($2 million net, according to North) – or sit down with the Gutwein government of Tassie and try to strike a “joint venture” deal that both parties can accept.

North, quite reasonably, are defiant about remaining in Melbourne.

Gillon McLachlan told the media on Friday that Tasmania represented a “50-100 year opportunity” for a Victorian club. But he added that it was a matter for the members and boards of those clubs to decide for themselves.

The game-changer in the Tasmanian discussions has been Premier Gutwein, who has taken a harder line on the North and Hawthorn dabbling. Gutwein, in essence, is saying you’re either in Tassie boots and all, or you’re not getting our money henceforth.

It is a gamble by Gutwein, given that the AFL can always hasten slowly – having long treated a Tassie team as our political class do an Australian republic: as something that “will happen one day” but which keeps getting pushed into the future.

The Carter report promotes the concept of a relocation of a Melbourne team as a more feasible outcome than the stand-alone Tasmanian team. The 19th team, obviously, is far more popular within that island state.

In identifying three options for Tasmania – stand-alone, full relocation or the murky “joint venture” – Carter’s report made a powerful moral case for Tasmania, while simultaneously providing a hard-headed business analysis that put relocation (full or partial) as preferred in economic terms.

His report is merely a road map – and road maps aren’t always followed. If North faces some challenges to replace the Tassie dollars, then the league also has to navigate difficult choices around funding, such as: what will they do if Gutwein makes good on his threat to pull the fiscal rug from underneath North and Hawthorn in Tassie?

North insiders are often incensed that they are placed in the relocation crosshairs when St Kilda and the Gold Coast and even Melbourne and the Bulldogs are not. The latter pair, though, have superb balance sheets and assets and are well and truly off the endangered list, even in COVID times.

North have a debt of about $450,000. St Kilda’s exceeds $10 million, and the Saints have received far more funding from the AFL for several years, despite a larger underlying fan base (in 2019, North received a distribution of $18.7 million compared to St Kilda’s $22.2 million). Yet, North are the club that have to justify their position.

One reason North have out-performed the Saints is that the latter abandoned Tasmania in the 2000s. Then there’s the enormous own goal of Seaford.

Having once pursued an economic rationalism agenda in the 1990s – and view that Melbourne had too many clubs – the AFL’s massive growth in broadcast revenue allowed the league to avoid the nasty calls and conflicts about the fate of impecunious or smaller Victorian clubs.

The Carter report, while making a moral rather than pure economic case for Tasmania, combined with premier Gutwein’s demands – has put the heat on North to avoid going south, both fiscally and in terms of their very identity.

Keep up to date with the best AFL coverage in the country. Sign up for the Real Footy newsletter

South Africa vs British and Irish Lions : Who will impress as Warren Gatland’s men attempt to win series?