Cameron Munster kept telling himself he could “burn it tomorrow”.

The Melbourne Storm star would go out after training and eat whatever he wanted to with little rhyme or reason. He shakes his head at the thought of how many times he splurged on the food delivery apps on his phone.

“It doesn’t hit you straight away during that week, but two or three weeks down the track, you start putting a bit more weight on, you just don’t perform,” Munster said.

But now Munster is nearing the shape of his career and he is open to a longer-term move to fullback after his switch to the No. 1 role helped to revive Melbourne’s premiership hopes.

Munster was a standout as Melbourne kept Penrith scoreless for the first time in seven years, and now Storm coach Craig Bellamy is open to keeping Munster at fullback for the remainder of the season after a knee injury brought Ryan Papenhuyzen’s campaign to a premature end.

The 27-year-old is already the game’s premier five-eighth, but even he suggests he may play his best football at fullback given the freedom he feels with the No. 1 on his back. 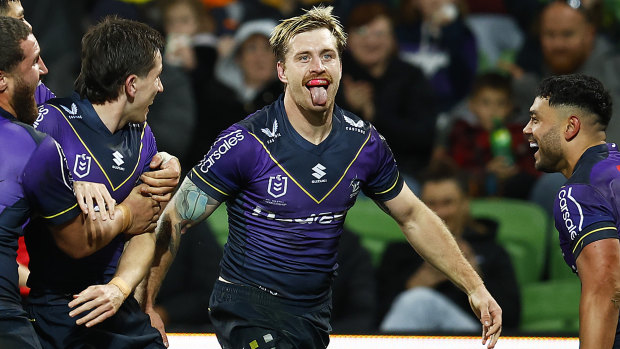 Cameron Munster’s form at fullback has sparked calls for him to stay in the No. 1 jersey.Credit:Getty

“When I had Cooper [Cronk], Billy [Slater] and ‘Smithy’ [Cameron Smith], I didn’t have to do too much. When they left I had to transition into a bit more of a five-eighth and a bit more of a ball player. When I’m in the six, I feel like I have to ball-play and not run as much,” Munster said.

“At fullback, you create those opportunities at the back of shape and get some try assists, but I feel like when I’ve got the No. 1 on my back, I can run the ball and I don’t have to worry about having to organise shape. That’s when I play my best footy, when I’m running the ball.

“I can still do that at six, but making so many tackles in the front line takes a little bit out of you at times. Playing at the back, I can take those kick returns, get my metres up, get one-on-one with someone, and close to the line I can run in some shape and pick the right option.

“I missed the open spaces, that’s for sure.”

Open spaces he can take advantage of after stripping most of the fast food from his diet. Bellamy, and every Storm fan for that matter, has Munster’s partner Bianca to thank for that.

“When I was single, I could do what I needed to do and I didn’t have to worry about someone on my shoulder trying to push me in the right direction,” Munster said.

“She’s massive for me. When you have someone supporting you and wanting you to do the best you can, it’s easy to get myself in shape.”

Obviously there’s a balance, Munster grins, because “you’ve got to mix in some fast food every now and then with a bit of ice cream”. If that’s what works, who are we to disagree?

“He’s certainly a different character, Munster,” Bellamy said. “But he is a great guy to have around the club and he is obviously one hell of a player. He competes in everything. That’s what makes him what he is.”