Benji Marshall has been praised for his professionalism and someone who will provide the “X factor” South Sydney have sorely missed in recent seasons on his first day at training with the Rabbitohs.

Marshall officially inked a one-year deal with Souths on Friday and to reunite with coach Wayne Bennett for one last hurrah after thinking just a few weeks ago his NRL career was over. 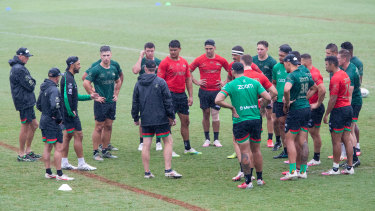 Benji Marshall, at left with white boots and backwards cap, training at Redfern Oval for the first time.Credit:Edwina Pickles

Impossible to miss in white boots and his cap on backwards, Marshall, 36 next month, chatted plenty with Bennett, stayed down for a few nervous seconds after a stinging hit from Jacob Host, and felt confident enough to bark orders and address some of the team’s senior players as what is likely to be the final chapter of his playing career commenced.

Souths skipper Adam Reynolds grew up idolising Marshall and told the Herald there were only positives with the Wests Tigers legend joining the team many have tipped as title contenders.

“He’s come in this morning and almost fit like a glove,” Reynolds, who was restricted to light duties because of a minor hamstring strain he suffered last week, said. “He knew a lot of the boys, most of us have competed against him.

“He brings professionalism, and his knowledge of the game, not just on the field but off it as well, he’s experienced the all the highs and lows. 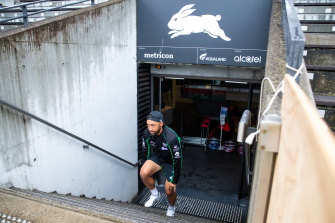 “He’s pretty special. When playing against him he was always special. He can add some X-factor for us, and maybe that’s what we’ve lacked a little here.”

Reynolds and Cody Walker are the club’s established halves, but Reynolds said Marshall “will put us all on notice”. The former Tiger will add depth to the halves while also being utilised off the bench as a utility or back-up dummy-half option.

Marshall put pen to paper around 7.30am on Friday. He arrived at the club’s training base before 7am and was brought a coffee by Damien Cook, the hooker who club insiders said “had never shouted a coffee in his life”.

The Kiwi international had a big-money offer on the table from Hull FC where good friend and former Tigers teammate Brett Hodgson is coaching, but was not interested in leaving Sydney, especially with partner Zoe expecting their second child.

“I have a lot of gratitude to get the opportunity to play again in the NRL,” Marshall said. “I couldn’t sleep last night I was that excited. It felt like it was the first day at school.

“It’s an opportunity for me to not only play, but to go out winning a competition. With this squad here, the coaches, it’s a great opportunity for that and that’s my goal.”

Marshall played under Bennett with the New Zealand Test team – he once convinced Bennett to dress in drag during a Newcastle race day at the 2008 World Cup – followed by the All Stars and then a season at Brisbane in 2017. 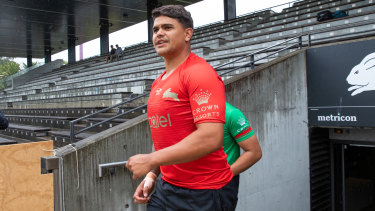 Latrell Mitchell continues to bounce back from a serious hamstring injury.Credit:Edwina Pickles

While Reynolds is taking it easy on Friday, the No.7 said he liked what he saw from Latrell Mitchell who is returning from a far more serious hamstring injury.

“We’ve spent a lot of time together this pre-season just talking about footy and life, and Latrell is in a really good spot – he’s happy and loving being here,” Reynolds said.

While Mitchell is expected to put pen to paper on a two-year extension, Reynolds is also keen to stay put.

A proud Souths junior, Reynolds is entering his 10th season in the top flight, and while it is hard to see him playing anywhere else in the NRL, the 30-year-old will make sure he holds out for a fair deal.

“We’re in no rush. I’ve grown up here, I’d love to stay here and hopefully bring home a few more rings – we’ll work out what the best fit is for myself and the club,” Reynolds said.

Adam Reynolds will head to Port Macquarie on Satrurday to join a host of Rabbitohs Old Boys to help raise funds for Jake Spurdle, a 15-year-old fan fighting against osteosarcoma, a rare form of bone cancer.

Will the Randwick council wet weather line stop Eddie from training at Coogee?