Brad Fittler would baulk at picking a player for Origin with just 18 games of NRL experience – but also knows players like Selwyn Cobbo “do not come along every day”.

Fittler has no interest in getting involved in the Queensland selection debate, but said NSW would have their work cut out if the Maroons opted for the powerhouse Broncos winger who bagged another couple of tries and put a Greg Inglis-like fend on Kalyn Ponga during their 36-12 runaway win over Newcastle.

The Thursday night clash in the Hunter was meant to be all about the return of Anthony Milford, who was supported in the stands by good friend and Canberra prop Josh Papalii, before Cobbo stole the show.

“He’s very talented, very athletic, instinctive, and he’d be hard to coach against at Origin level, be it this year or in the future,” Fittler said.

“I do find him enjoyable to watch. Of course it’s always a risk picking a player [with such little experience], and there would be other players who have played in bigger games and on the bigger stage, but these blokes don’t come along every day either.

“He actually reminds me a bit of Jamal Idris, just the way he runs into people. He’s got size but is also so athletic for a big fellow. 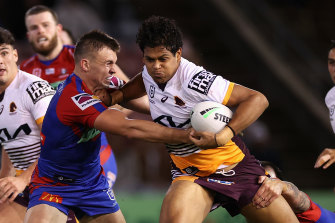 “I remember watching the first game of the year, he had about five tryscoring opportunities and didn’t get one of them, but 11 weeks later he’s almost [converting] every opportunity.”

Broncos skipper Adam Reynolds, who missed the Knights clash with a groin injury but is determined for next Friday’s clash against Gold Coast, said it was easy to see the comparisons being made between Cobbo and Inglis, with whom Reynolds won a premiership with at Souths.

“You can see the similarities with the looks and the way they move, and Selwyn is probably a bit more active than Greggy,” Reynolds said. 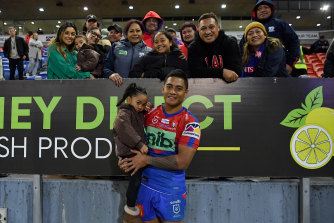 “Selwyn is still learning his trade, but he has that raw talent and playing what he sees is a benefit.”

Broncos coach Kevin Walters said Cobbo loved the big occasions and good, consistent football would always have him in the Origin conversation, regardless of how many games he has played. The Broncos are hopeful of extending the 19-year-old’s contract a further two years until the end of 2025.

“Like a lot of our former Indigenous players and current ones, he has a great sense of the game, where the ball is, how to use his body, great speed anticipation, all those things our great Indigenous players have … it’s wrapped up in Selwyn’s body; he’s a player,” Walters said.

Meanwhile, Papalii enjoyed a luncheon ahead of his 250th NRL game on Thursday before boarding a late flight from Canberra to Newcastle to watch Milford.

“I wanted to be here for his return, he was best man at my wedding and we were always close growing up,” said Papalii, who was still recognised by Knights fans with a hoodie over his head.

“Our families are close, and I wanted to show my support.

“It’s been tough for him, but he’s one of those blokes who always comes through the tough times. He’s had a lot of support.

“There were a lot of positives with his game, Newcastle just weren’t on tonight.”