Home » Footy’s not back on Thursday night. It’s been back for a while

We heard it when Shane Warne championed the return of “proper footy” in a strongly criticised Twitter video to promote the Saints v Blues clash on Wednesday.

But it’s factually incorrect. Footy is not back this weekend. Men’s footy is back, but footy has been back for a while. 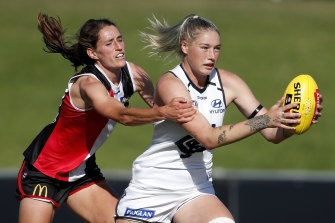 Carlton and St Kilda met weeks ago in the AFLW.Credit:Getty Images

Footy – as in Australian rules football played at a national, top-tier level – has been back since January 28 when Collingwood beat Carlton in the AFLW season opener.

Warne later clarified that he intended “proper footy” to mean Aussie rules as opposed to “other footy codes”, presumably soccer and rugby union with the A-League and Super Rugby already underway.

But the fact it generated such a strong response before his clarification is totally understandable.

When fans and players are used to being treated a certain way – just read what trolls say in Facebook comments and Twitter threads about AFLW – stinging reaction to off-the-cuff comments such as Warne’s is hard to avoid.

This is the fifth season of the AFLW. That is, the fifth year there has been a national women’s competition equivalent to what men have had for decades.

Watching the way we speak might seem like a small thing and in some ways it is. But in others, it’s not.

The language we use around the AFLW matters, and footy media and supporters should at least be able to treat both competitions equally when speaking.

Because if we can’t treat them equally when simply addressing the topic of footy in everyday conversation, then closing the gaps in other areas of the competition all of a sudden seems a gargantuan task.

AFLW fans, players and footy administrators want the competition to improve in many areas, not least the coverage it receives. 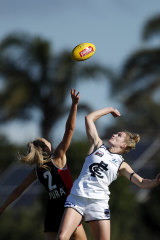 Alison Brown and Breann Moody clash in the ruck.Credit:Getty Images

The phrase “footy’s back” might be said on radio and television by commentators and hosts, on social media posts by fans and media outlets, or in conversation with colleagues, family and friends.

It’s more often than not said harmlessly and out of habit, but it doesn’t mean we shouldn’t try and change the pattern of behaviour that causes it.

The official AFL Twitter account tweeted on Monday before men’s pre-season games tickets went on sale that: “Footy is just around the corner and now everyone can see it live”.

The tweet was criticised, for obvious reasons, and then it was deleted.

And it’s not just variants of the phrase “footy’s back” that can de-legitimise the place AFLW holds within modern Australian rules football.

It’s an easy mistake to make, one that I was guilty of last week when I wrote that “no games were held in front of fans in Victoria in 2020” in a story about 50 per cent of crowds being allowed back into stadiums for the AFL season.

Writing that “no games” had crowds in Victoria is not only factually incorrect, it is ignorant and disrespectful to those who support AFLW and to the women who work so hard to play in the competition.

It’s OK to get it wrong, given we have been used to one national or top-level footy competition, for the men, ruling in this state and country.

But nearly five seasons into the AFLW it’s time to learn from those mistakes and change the way we define “footy”.