The air crackles when Kysaiah Pickett gets near the ball. The crowd leans in; they hold their breath and smile, watching and waiting for what he will make happen next.

Pickett’s two goals against the Saints on Saturday night were both moments of cleverness and a ruthless refusal to give up on the contest. He fought for the ball, then snapped smartly. When players such as Pickett and Izak Rankine play, it’s easy to fall back on superlatives about their X-factor, but those things only happen because they are utter competitors. 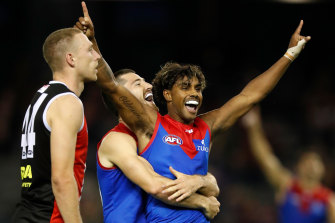 Pickett hasn’t just added to Melbourne’s forward bite – along with Charlie Spargo, whose cleverness and pressure has been vastly better this year – he has also joined Jimmy Jordon in better complementing the midfield blend.

Pickett started every quarter at the centre bounce. He has an unnerving effect around the ball, gives the Dees more energy and improves the balance of similarly paced inside players they were running through the middle last year. Pickett gives them a vibrancy and excitement both up around the ball and forward that was lacking last year.

Pickett is emblematic of the subtle shift at Melbourne, where early season form points to encouraging signs of growth and change. We stress, early season.

The effect of Pickett and Luke Jackson, who did not have a huge game in the win over the Saints but is starting to take incremental steps each week, were reminders of the fact they both arrived at the club two years ago after an aggressive trade hand. 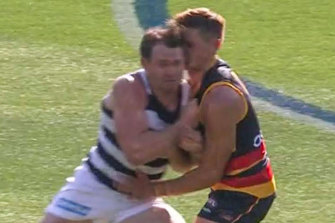 Patrick Dangerfield was banned for this bump but played in a practice match.

Logically a punishment should mean you lose the match fitness, due to being banned from playing matches.

Dangerfield and Williams did nothing wrong in playing, but it seems illogical they should have been allowed to do so.

SCOTT A CASE TO ANSWER

This is not a Cats-bashing piece but Chris Scott should be fined for his approach to the Lions at the break on Friday night.

It doesn’t have to be a massive fine, but he needs something. It was a poor look. Damien Hardwick was fined $5,000 for abusing the fourth umpire in 2012. The fine was suspended.

Scott at least needs a suspended fine of a similar amount.

Scott can protest that he was responding to Lachie Neale and Joe Daniher engaging with him, but that is not really the point; he needed to be better than that. Let the players do the walking and talking.

Scott will not like watching a replay showing his captain Joel Selwood having to come over and pull him away to talk to his own players, not Brisbane’s.

Changkuoth Jiath gave Dusty a don’t argue in the third quarter of Richmond’s win over the Hawks on Sunday. This is mentioned because it should be noted somewhere. Jiath’s athleticism and confidence, which is growing by the week, has never been more evident than when he fended off Martin and ran away from him. There is a lot to like about “CJ”.