The first sod is turned at VFL Park

… And they were quick to move in when the all clear came from the Victorian Football League president, Sir Kenneth Luke. 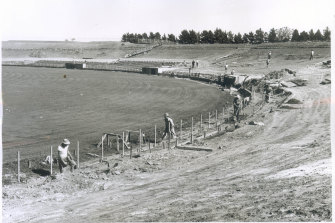 Construction work on the terracing at Waverley Park in 1967.Credit:Alan Lambert

Minutes after Sir Kenneth had turned the first sod at the VFL Park, Waverley, the bulldozers and graders driven by John Smith, Bruce Sinclair and Bill Thorne went into action.

They began gouging big holes in the earth and pulling down trees to make way for the new League ground which is expected to be opened by 1968.

Yesterday’s historic occasion is sure to be remembered by the 70-odd people who attended the “turning of the first sod” ceremony.

Sir Kenneth turned the first spade in the spot where the ball will be bounced on the new ground.

There was a football there to give a touch of the real thing. 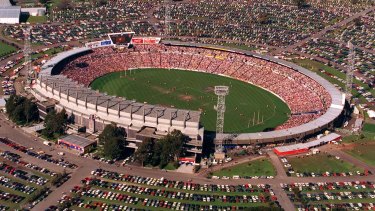 The last game at Waverley Park in 1999 pitted the Hawks against the Swans in front of a capacity crowd of 72,130. Credit:Joe Armao

Besides Sir Kenneth, three other men made their mark on the new ground.

They were the former Governor of Victoria and patron of the VFL Sir Dallas Brooks, former Carlton coach Percy Bentley and Footscray committeeman Jim Bingham.

The spade and the football used yesterday will form the basis of a football museum at the Waverley ground.

Before the ceremony, Sir Kenneth said the 212 acres bought at Waverley for £220,000 was now worth three times that amount.

“In the very near future it will be worth £1 million,” he said.

“It was suggested we build a ground at Heidelberg or Broadmeadows, but the League chose this site because we believe it is the fastest growing area of Melbourne.

“A survey of the whole Melbourne area was taken before we decided on this as the best district to build the new ground.”

Sir Kenneth said he would like the League to have grounds in the north, south, east and west outer areas of Melbourne, but this was impossible.

He added: “The present competition is unbalanced and will be until each club plays each other twice a season.

“Construction of the Waverley ground will help us extend the season, and to have two complete rounds of matches.”