Home » From the Archives, 1997: Carey a beacon in Roos victory over Geelong

First published in The Age on September 8, 1997

Wayne Carey missed half a season because of a dislocated shoulder, and then by his own admission didn’t start to fire until about five weeks before the end of the season. 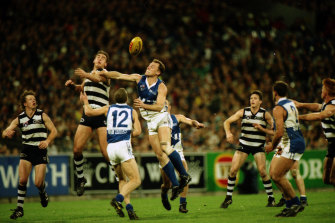 North and Geelong players jump for the ball. Credit:Vince Caliguiri

In theory, that made him cherry ripe for the finals, and so it proved last night at the MCG, when with a masterful seven-goal performance at centre half-forward, he propelled North Melbourne to an 18-point defeat of Geelong in the third qualifying final.

North was facing sudden elimination if it dropped last night’s clash to the second-placed Cats, but with Carey in superb form at one end and Glen Archer at his meanest at the other, North slowly but surely established superiority in the second term and was rarely threatened thereafter.

But before the Roos prepare for Saturday’s MCG clash against West Coast, they must sweat on the deliberations of the umpires and the tribunal, with Archer facing a report for allegedly making contact with Garry Hocking with his boot in the third term, while Wayne Schwass also faces scrutiny after a clash with Carl Steinfort.

Any doubts about North‘s hunger, given its wobbly end to the home and away season, were dispelled in the opening few minutes. Archer, the team’s intensity barometer, was superb early with three saving marks deep in defence, while North‘s tackling and desperation was outstanding. Geelong, however, is no slouch in that department and matched North in the vigor stakes from the start.

And it was Geelong that drew first blood, courtesy of a powerful two-grab mark and goal from Paul Lynch from just in front after seven minutes. But it was matched within two minutes by Brett Allison with one of his patented run-in goals set up by a clever tap from Carey.

Carey was everywhere in the opening half, and after a spirited opening batle with Ben Graham clearly held the honors by half-time, with four of North‘s six goals. He and Allison were North‘s liveliest forwards and it was Allison who put North ahead after he was the recipient of a relayed free kick when Peter Bell was downed by Michael Mansfield after disposing of the ball. 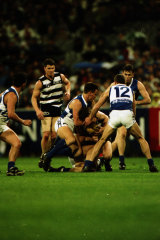 Carey put North 21 points ahead after a goal-square snap, aided by an errant Brad Sholl handball that rebounded off Robert Scott straight to the North skipper. But North couldn’t stretch its lead – Lynch kept the Cats within striking distance after kicking a goal on the run, but the assist belonged to John Barnes, who took a gutsy mark on the wing to set up Geelong‘s forward thrust.

Barnes spent the first half on the wing, with Steven King taking the centre bounces for the Cats. North ran Mark Roberts with Barnes in the first stanza before switching Corey McKernan there in the second quarter. McKernan had started across half-forward alongside Carey, but moved after being soundly beaten by Leigh Colbert.

North led by a goal at quarter-time and had only stretched its lead to nine points at half-time despite dominating the second term. Carey was brilliant with three goals for the term, while Wayne Schwass, David King and Anthony Stevens were providing great drive in the midfield. Stevens was engaged in an enthralling battle with former teammate and good friend Liam Pickering in the centre, and while the Geelong man took the points in the first quarter, Stevens gained several all important touches in the second. But it was Carey, with 12 touches, five marks and four goals to the long break, who was threatening to take control.

The third term was one of the most gruelling quarters seen at the MCG for some time. If not for the lights shining through the teeming rain, it might have been the 1950s. And it was tough, as highlighted by Archer’s report.

This lifted Geelong and the Cats attacked incessantly for the first 15 minutes. But they were able to muster only one goal, that from Hocking after a 50-metre penalty from the free kick against Archer for the report.

There was little joy for the Cats thereafter, despite repeatedly pumping the ball forward. And sure enough, it was Carey who made Geelong pay, dribbling one through from a left-foot snap at the 18-minute mark. That made the difference nine points. By three-quarter-time, it was 15 points after a dreadful kick by Darren Milburn was intercepted by Robert Scott, who passed to Carey, who now had Barry Stoneham as his opponent. While Carey was preparing to kick, Ben Graham interfered with Darren Crocker in the goal square, and Crocker kicked truly from the relayed free kick.

North went into the final change with the momentum, particularly if the savage blast handed out by Geelong coach Gary Ayres to his players could be taken as a guide. But the Cats failed to respond, and were thrown into the mire just three minutes into the last quarter when Carey loomed again, marking in front of Stoneham and kicking a goal. It was now 22 points North’s way and the Cats were seemingly gone.

But they are a resilient mob at Kardinia Park and no sooner did it appear over than Pickering snapped truly with his left foot to whittle the margin back to three goals. Carey bombed a free kick from outside 50 metres to make it four goals again, but quick goals to Mansfield and King made it two goals again with seven minutes remaining.

An Allison goal from a strong mark proved to be the sealer. Predictably, the pass came from Carey, who finished the night with 23 touches, 10 marks and a lazy seven goals.

Wright set for key role off the Reds’ bench