Home » Rugby » From the Archives, 1998: Fate favors the Pies in narrow win over Freo

That the wheel of fortune turns occasionally to deliver what it has previously taken was not lost on Collingwood supporters yesterday. 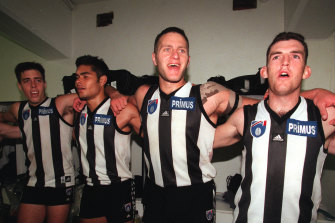 Only three games ago the Magpies were denied four points by Tony Lockett who, by kicking 10 goals, all but single-handedly won Sydney a game it would otherwise have lost.

Yesterday, at Victoria Park, Collingwood picked up its first win in a month for the same reason that it lost that MCG encounter; the utter domination of one key forward who was beyond any sort of restraint.

As spunky and superior in general play as Fremantle was, as dominant as Docker ruckman Matthew Burton was – he recorded a staggering 56 hit-outs – everything the opposition could muster fell short of Saverio Rocca’s 11 goals. 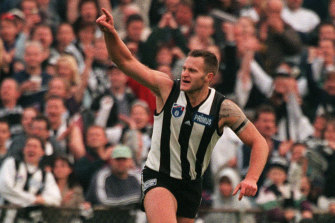 Sav Rocca on his way to 11 goals.Credit:Pat Scala

When the Dockers got off to a flyer in the first term with five goals, Sav answered with four of his own. In the second, as Fremantle began to consolidate its position through Burton and his ground level cohorts Adrian Fletcher, Jason Norrish and Brad Dodd, he booted another three.

At half-time Rocca the elder was responsible for seven of Collingwood‘s nine goals. A deficit that might easily have been four goals, and perhaps should have been, was instead 10 points.

The Pies, through some neat tactical planning, were assisting where possible. By keeping a 30-metre zone around Rocca clear and kicking noticeably longer than usual into the forward line, Sav had only one man to beat when the ball came his way. 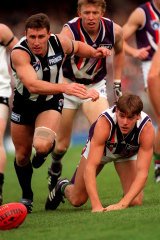 “We isolated him really well, gave him plenty of room and he didn’t let us down,” coach Tony Shaw said with considerable understatement.

In this situation, neither the experience of Stephen O’Reilly nor the athleticism of Trent Carroll, the first two of his three opponents, mattered in the slightest. Sav’s hulking might was simply beyond their control.

“Our tall backs were comprehensively beaten and that really hurt us badly,” said Freo coach Gerard Neesham. “I don’t want to criticise the opposition because Sav clearly outplayed the people he was on but normally the percentage of goals to times in (the 50-metre zone) don’t resemble what happened today.”

In the third term, when Nathan Buckley began to break from the attention of Dodd to spirit the ball from the contests that the Dockers had previously won, the previously absent support for Rocca appeared to be at hand.

Still, by the 25-minute mark of the quarter Kingsley Hunter, who would finish with five goals in a promising return, had put the Dockers 24 points clear, something near to the 28-point break they had established earlier in the term.

Rocca, with his eighth and ninth goals, had pulled the Magpies back then and when he slotted his 10th as the end to time-on neared, he did it again. At the last change, the Pies trailed by just six points.

“I thought the crucial time of the game was when we were 28 points up and we let them back into the game. You can’t do that.” Neesham said.

If conceding three goals in time-on of the third quarter unravelled Fremantle, the five consecutive goals Collingwood opened the last quarter with, including Sav’s 11th, settled the matter.

At Victoria Park, an eight-straight run from the home team inspires the sort of momentum that is almost impossible to resist.

The Dockers very nearly did it, though, with three late goals. It took a crunching collision between Richard Osborne and Fletcher, which broke Fletcher’s collarbone, to stymie Freo for good. The last minutes petered out to nothing.

And by then, one man was standing above all others.

“Eleven goals is a great effort. It would have to be one of the best 11 goals from an individual in one game,” Shaw later said.

Scot Burns (Collingwood) reported by field umpire Ellis for striking Craig Callaghan (Fremantle) with an arm to the head during the second quarter.

Matthew Burton v Damian Monkhorst/Mark Richardson/Matthew Francis. The big man from Freo had Monkhorst banished before quarter-time, was too tall for Richardson and only marginally less dominant in the last term when Francis was brought off the interchange bench. The hit-out count read: Burton 56, Collingwood 31.

Sav Rocca v Stephen O’Reilly/Trent Carroll/Daniel Parker. The big Sav kicked three goals against O’Reilly in the first term and was then confronted by Carroll who conceded seven before Parker got the dreaded call at three-quarter time. Funnily enough, in the Pies’ most productive quarter, the last, Sav managed only one. Parker was handy but we suspect scoring fatigue was an issue by then. S Rocca’s stats read: 14 kicks, 13 marks, two handballs and 11.1.

Nathan Buckley v Brad Dodd. The first-year Docker was instrumental in Fremantle’s great start and was able to blunt the effectiveness of Buckley’s first-half possessions but in the third term the Magpie midfielder cut loose and was decisive. Buckley’s clearances late in the third term were critical to the three goals the Pies kicked in time-on which turned the game around.

Tony Shaw (Collingwood): “It’s great to get four points. After the trends of the last couple of years, to stop three losses in a row was good.”

Gerard Neesham (Fremantle): “He (Sav Rocca, who kicked nine goals against the Dockers at Vic Park last season) must just lick his lips when we’re coming this way. He just has a birthday on us.”

The Big Sav – 11 goals. To steal a line from Sandy Roberts – what more can you say.

‘We are going to correct it’: V’landys flags potential return of under 20s as blowout fix