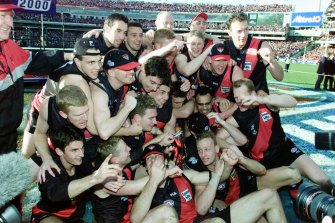 Bombers jubilant after winning the 2000 grand final in the first year of the new finals system.Credit:John French

From the 2000 season, teams that finish in the bottom half of the final eight will be eliminated if they lose their first final.

The AFL yesterday bowed to pressure from clubs and supporters and replaced the complicated McIntyre finals system by heavily stacking the odds in favour of the top four teams.

The eight has effectively been split into two divisions. The top four sides play among themselves in the opening week and are guaranteed to progress to the second week. The bottom four face sudden death and must win four consecutive win the flag.

The AFL’s chief executive, Mr Wayne Jackson, said supporter confusion over the former system had been a major reason for its demise. 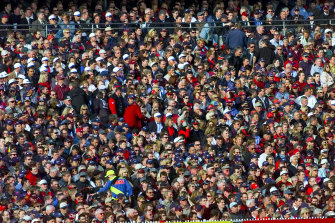 The crowd at the 2000 grand final, the first played under the new finals system.Credit:John French

“Footy supporters found the McIntyre system difficult to understand and I think we do need a finals system that is user-friendly,” he said. “We think this system is more equitable to more teams.”

The league believes one of the great advantages of the new system is that it cuts out the possibility of the third or fourth-placed sides being eliminated in the opening week.

The new system is the 10th to be introduced in the 103 years of VFL/AFL football, but the fifth in the past decade. It was welcomed by the clubs.

In the opening week of the finals, first plays fourth while second takes on third. The winners go straight through to the preliminary finals and the loser must back up in week two for the semi-finals.

In the bottom half of the draw, fifth plays eighth and sixth plays seventh. The losers are eliminated and the winners are promoted to the semi-finals. The preliminary finals follow the old system.

The league believes another advantage of the new system is that the top four clubs earn the right to home state finals, even if they lose in the opening week, avoiding the controversy of 1997 when second-placed Geelong lost to seventh-placed North Melbourne in the opening week and then travelled to Adelaide to face the Crows, who had finished sixth.

“While the top four teams in theory have an equal opportunity, the top two obviously play in their home state, so they get a significant advantage in the first week,” said Jackson.

“We think this system is more equitable to more teams, in so far as we can’t have the third or fourth teams which have clearly won that right over the full season being knocked out in the first week of the finals.”

The AFL has been under intense pressure to change the McIntyre system for a number of years. The league has received hundreds of submissions or presentations offering a new finals system.

“In the end we believe that if we are getting that sort of response and they were finding the current system to be difficult to comprehend then perhaps there was a more simple way of doing it which would be embraced by a lot of people,” said AFL football operations manager Ian Collins.

The Kangaroos were the only team to support the McIntyre system in their submission. Chief executive Greg Miller said he believed the team that finished top at the end of this season had the right to play the eighth finishing team.

The new system was considered and passed over in 1994, when the final eight was introduced.

“We went for the McIntyre system because it was preferred at that time, subsequently It has been proven that it may be too complicated … so we have changed.” said Collins.