Home » From the Archives, 1999: Hawks overrun Saints after trailing by 63

Ex Saint ends day on the right side

THE passes were often a fraction too high, a few degrees out. The timing was off enough early to be caught several times with the ball. For one discouraging half, his exflatmate was having way too much fun playing on him. But by the end of his first game against his old club yesterday, Joel Smith was probably the happiest man at Waverley Park. 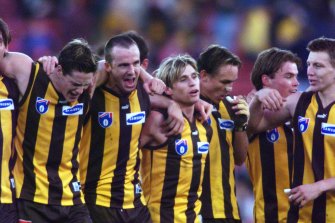 It began so badly for the young player who left St Kilda for Hawthorn in bitter circumstances after the 1997 grand final loss (St Kilda chief executive Don Hanly accused him of turning “his back on everybody, including the mates he lived with, was drafted with and played with”), his 1998 season already wrecked by a knee reconstruction. He had been so looking forward to this game, and not just because it was against the club that used its first pick in the 1994 national draft to recruit him.

Smith still had a lot of friends at St Kilda. He’d spoken to a couple during the week just to make sure they could catch up for dinner after the match. His ninth senior game for the Hawks would, he hoped, make it a memorable meal. 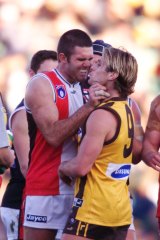 That looked a distant prospect after barely half an hour. As the teams had crossed before the opening bounce, Joe McLaren sought Smith’s hand and Max Hudghton gave him a quick welcome back pat; stationed surprisingly at full forward, his ex-flatmate Austinn Jones had dropped a friendly shoulder into him a couple of times to let him know he was there.

And that was as close as he or many of his Hawthorn teammates got to a Saints’ player for the first quarter. With the odd heckler taunting him to get a kick, Smith was forced to watch from the goal square as St Kilda blitzed its opponents. It was only when he was moved to a wing after 27 minutes that he finally got hand to ball. By the time the first quarter siren sounded, with St Kilda up 9.4 (58) to 1.1 (7), Smith might have been wishing the police helicopter that delivered Blue Heelers actor (and Hawks man) John Woods to the centre of Waverley Park before the first bounce had left with him on board.

Playing across half forward in the second quarter, Smith began to work his way into the game. His disposals were erratic, but at least he was getting the ball. At the 19-minute mark, he offered a reminder of why Hawthorn had waved a $400,000 three-year contract at him, exchanging rapid handballs on the wing before sending a kick down Paul Salmon’s throat in the goal square. The passage may well have saved his day, as moments later he was headed to the interchange bench before being sent back.

Smith’s best contribution of the day came in the first 30-seconds of the third quarter, when he took a handball from Aaron Lord, wheeled around and chipped delicately into the path of Nathan Thompson. Thompson goaled and, suitably encouraged, the Hawks turned the match with a 10-goal period. 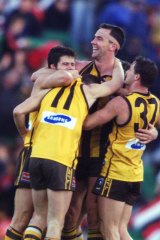 As the fourth quarter unfolded, Jones was sent forward, Matthew Young and then McLaren moving on to Smith. The real action was elsewhere, however. At the 28-minute mark, Nick Holland kicked his fifth goal to seal Hawthorn’s stunning 13-point win. Smith bounded up, ruffled Holland’s hair and ran back to the top of the centre square.

Streaming in after the bounce, he had to alter direction sharply to avoid an attempted shirtfront from Peter Everitt. When the ball was killed, he jogged over to Everitt, whispered a few words in his ear and patted his stomach. Just “Spider” having a bit of harmless fun, Smith smiled later.

When the siren sounded, Smith jumped on to the pack surrounding Paul Salmon and clung tight. He then hugged everyone he could find in a brown and gold guernsey. Eighteen possessions to Smith and four points to his club amounted to a fair day’s work.

In the raucous rooms afterwards, Smith described it more excitedly. It was “one of the greatest wins” he’d ever been involved in. That it came against StKilda was incidental.

Last night, Smith was heading to Fitzroy Street for dinner with Jones and Tony Brown. It was uncertain who’d be paying. It was clear who’d enjoy the food most. 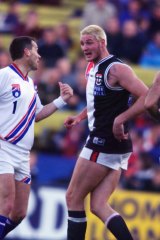 PLAY OF THE DAY

The clock read nine minutes 40 seconds in the final quarter when Hawthorn planted its nose in front for the first time in the game, having come from 63-points down in the second quarter. Nick Holland, just inside 50 metres and almost straight in front, drove through the goal with a sharp, deliberate kick, and Waverley Park erupted.

Thompson (Hawthorn) v Hudghton/Elliott (StKilda): with the game spiralling out of Hawthorn’s grasp in the first half, the move to bring on Nathan Thompson was rewarded with a spectacular three goals in 18 minutes in the third quarter. He had the aerial skills, height and running skills to comprehensively beat both his opponents.

Holland (Hawthorn) v DWakelin (StKilda): Wakelin restricted Holland to one goal in the first half, but St Kilda had restricted every Hawthorn player at that stage. Holland turned in a magnificent second half with four goals and 12 marks for the game, providing a focus so desperately needed.

Harvey (St Kilda) v Crawford (Hawthorn): Harvey was on song for best-on-ground for his first quarter in which he kicked two goals and created two more, with Crawford left only with memories of how he restricted Harvey the previous time the two met. But the Hawks’ captain came back into the game and worked tirelessly, and Harvey was his side’s best.

Ken Judge (Hawthorn): “It might sound surprising, but our blokes thought they could win at half-time … it’s the best comeback I’ve been involved in as a coach and I’d like to think it’s a win that will help us grow as a club.”

Tim Watson (St Kilda): “When you have a lead like we did, you wouldn’t expect that you’d surrender a lead like that … we probably allowed ourselves to be hunted by the Hawks in that third term.”