The mysteries of the contest elude Demons

IT WAS a game that left everyone wondering. Even mystified.

It was such a curious affair that the winning coach, Port Adelaide‘s Mark Williams, opened his post-match press conference with unprompted criticism of his team. The best that he could make of it, he said, was that despite all the things that went wrong or didn’t work his players persevered. 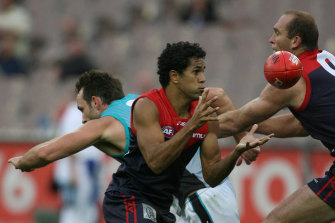 David Neitz pushes Port’s Darryl Wakelin in the back and gives away a free, Aaron Davey who goes on to kick a goal which would of won them the match, was disallowed. Credit:Sebastian Costanzo

“Who knows what turns a team on?” Williams asked no one in particular, clearly of the opinion that Port weren’t turned on or tuned in yesterday at the MCG. At least, by pipping Melbourne in time-on with the last goal of the match, it didn’t drop out. “I was rapt by the persistence of it,” he said of the five-point win, Port‘s first against the Demons at the ground.

Of course, bemused as he was, Williams still had the grit of an ugly win for consolation. Neale Daniher had nothing. Or, to look at it another way, everything apart from what matters most; the premiership points. 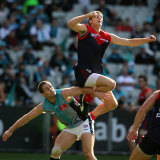 Added to that, James McDonald broke even with Peter Burgoyne, there was industry from Nathan Brown and Cameron Bruce, plenty of involvement from Aaron Davey and a tenacious, goal-kicking midfield game from Nathan Jones.

The Demons knocked up more possessions – 66 more than Port – and not just of the meaningless kind. They broke through their own 50-metre arc more often than the opposition did theirs, they won a majority of the often-critical first possession from ball-ups and throw-ins and, somehow, it all came to nothing but misery. 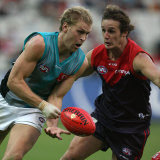 Which is exactly what Daniel Motlop did with less than three minutes to play yesterday. The quivering anti-hero of last year’s infamous round-16 loss to St Kilda at Launceston, when he disintegrated under the pressure of having to win the match after the final siren, Motlop paid back his debt with an exquisite flourish that deserved a bigger occasion. It was a matador’s touch in an otherwise scrappy game, a contest in which both sides kicked only three goals in the second half.

The critical passage began with an unintelligent kick from young Demon Matthew Warnock, who charged out of defence like a souped-up V8 and put the ball straight into the arms of Brendon Lade. The Port ruckman swiftly passed to Peter Burgoyne who, understanding precisely the state of the game, counter-attacked and drifted a pass with precisely enough weight and direction to reach Motlop’s hands instead of the spoiling Carroll. As the Melbourne defender plunged back to earth, Motlop effortlessly spun towards the boundary, stepped inside White with a shimmy that left the Melbourne ruckman grasping. He then cooly slotted the winning goal from 30 metres with the outside of his boot.

It was Port’s only goal of the term and its first for 35 minutes. It was glorious, audacious and telling. It was, as Daniher later put it, polish – the sheen that only players of high order bring to the game. 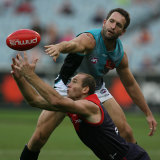 Daniher noted that the figures told him his team kicked the ball with 14 per cent more accuracy than Port over the course of the match. He seemed to be making the point that routine accuracy and brilliance are two very different things. Or maybe, again, the point was that the course of this game and the final result were more than slightly contradictory.

“We just lacked a little bit of polish and, at the end of the day, Motlop showed that polish and we lost by five points,” Daniher concluded.