First published in The Age on September 6, 2009

FIVE goals in front a minute into the final quarter of the elimination final, Carlton stared at prosperity and another week’s fun in the finals. But the Blues did not have the self-belief when it counted most. The Blues’ season is over, after the Brisbane Lions conjured a miracle recovery to win by seven points at the Gabba last night. 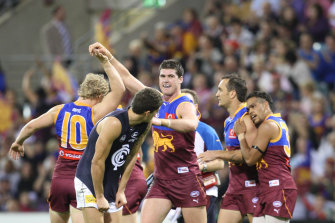 The Lions, inspired by their twin towers up forward, Jonathan Brown and Daniel Bradshaw, booted the last six goals of the game without answer to advance to the semi-final against the Western Bulldogs at the MCG on Friday night. It was one of the greatest heists in recent memory. Call it the Miracle at the Gabba.

The steal was completed in 20 minutes of mayhem that included two goals each from Brown and Bradshaw. The latter’s swerving kick from 40 metres out around his body and from the boundary line at the 26-minute mark was the killer for Carlton. A partisan 32,000 crowd roared its approval; in the stands even Prime Minister Kevin Rudd was moved to his feet beside a less enthusiastic Mike Fitzpatrick.

Bradshaw (five goals) and Brown (four) were too much for Carlton‘s much-criticised defence on the night, and Simon Black penned another chapter in his great story by playing an outstanding final despite spending much of the week under a cloud because of a hamstring strain. Black was on his own doing sprints 20 minutes before the game to warm up and spent much of the time stretching in the quiet parts of the game; his work ethic brought him 29 disposals and many hard balls on the night.

The Lions are a team built upon youth and AFL Rising Star Daniel Rich was prominent with a brilliant goal from a stoppage in that final term. Symbolically, one of Bradshaw’s goals came from another stoppage where James Hawksley (10 games) and James Polkinghorne (23 games) extracted the Sherrin and forced it forward. 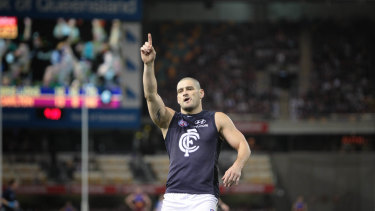 Until that final 20 minutes, Carlton had enjoyed its first appearance in the finals since 2001. The Blues had kicked six goals to two in the third quarter to surge to what appeared to be a match-winning lead. When Cameron Cloke launched a long bomb from 55 metres for the first goal of the final quarter, the lead was five goals.

It was a scintillating Chris Judd performance in midfield that fired Carlton last night, the captain shrugging off the cobwebs after one of his quietest games for the season against Adelaide in round 22. Judd had 30 disposals and with strong support from the likes of Ryan Houlihan (25) and Andrew Carrazzo (25), Carlton appeared to have done enough.

Of all the crucial stats Judd collected, a second-quarter effort involving opponent Michael Rischitelli will no doubt come under most scrutiny. TV cameras picked up an incident early in the second term when Judd appeared to make contact with the eye of his Lions rival as they struggled on the turf.

The opening quarter was a goalfest, unlike a traditional final. Carlton had the opening three goals on the board inside seven minutes, including a team-lifter from Matthew Kreuzer on the run from 50 metres after he contested and won a centre bounce tap-out and surged forward to receive a handball from Marc Murphy. It encapsulated the bright future that Carlton appears to have.

But the Lions would not let go, playing an offensive brand with Ash McGrath surging out of defence and spotting up teammates. There were few if any hard tags in the middle and even Judd was allowed some freedom. Black, who came up fit despite fears about a hamstring injury, went to Judd at the first bounce but there were plenty of rotations.

Judd and Black were quickly into the fray like the champions they are, hitting in hard at the stoppages. 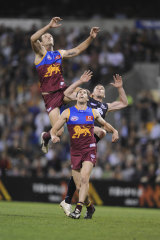 The Lions’ potential advantage with marking power up forward became evident. A dreadful defensive lapse allowed Brown to mark unattended on the line in front of the behinds. Brown banana-kicked a goal and soon afterwards Bradshaw also took a strong, contested mark to goal. Brown must relish the presence of Rich in his midfield; Rich’s 55-metre laser pass from the middle in the second quarter was a thing of beauty, looped over a Carlton defender by a few millimetres to a sliding Brown.

Brisbane had Black on the park, an essential, and Daniel Merrett also managed to get on to the field to take his job as the marker for Brendan Fevola. But Josh Drummond was a late withdrawal and so was Joel Macdonald. The Lions hit back hard in the second quarter and Mark Austin’s behind from 45 metres deep into the quarter gave them the lead for the first time in the match; they would hold that slim advantage into the long break.

But Carlton‘s third quarter was electrifying. Players such as Nick Stevens, who had managed a limited influence, began to surge forward taking risks and capitalising, and Judd’s blue-collar work at the stoppages began to tear at the heart of Brisbane. The Lions had Rischitelli marking him by this point, but Judd had 11 disposals for the quarter, sprinting away from the stoppages in his inimitable style.

Up forward Fevola began to get involved, too, after earlier being well held by Merrett. Fevola’s solitary goal of the first half had come from a freakish one-handed pluck on the goal line; in the third quarter he would lay off a pass for Stevens to goal, then drill one himself from a tight angle, signalling to the crowd with a hand in the air. His run down of Joel Patfull gave him another goal and another tick for hard work. 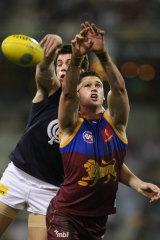 The Blues would garner six goals to Brisbane‘s two for the quarter in what looked to be the match-winning period of the game, however, that in the end went to the Lions’ final 20 minutes of the match.

A crowd of 32,702 people watched the game despite strong competition from a Wallabies rugby union Test against South Africa just down the road at Lang Park.

Eight minutes into the last quarter, with the Blues 28 points to the good, Jonathan Brown marked in the goal square, the beneficiary of a lame effort by Bret Thornton to spoil on the goal line. The Lions kicked the next six majors to snatch the game from the Blues’ grasp.

Chris Judd was magnificent for Carlton throughout, showing the potent mix of cool poise and hard-at-it grunt that has made him a premiership captain. But Simon Black was his equal in the opposite corner, rising in the last quarter in an inspiring display.

Brown and Daniel Bradshaw finished the game’s dominant figures on the scoresheet, kicking nine goals between them.

Carlton’s season, which has promised so much at various points during the season, has finished miserably. The Blues’ defence, in particular, has again been cruelly exposed, and on the biggest stage.

The Lions will live to fight another week, but they will need a more even performance if they are to progress further into September.

Kidney surgery for Tarrant, out for half the season