Home » Rugby » From the Archives, 2010: Old heads give Hawks edge over Tigers

Old heads give Hawks the edge 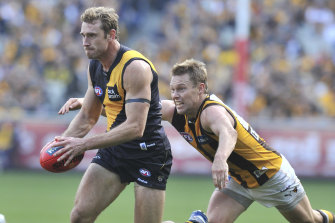 Shane Tuck is hunted down by Sam Mitchell.Credit:Joe Armao 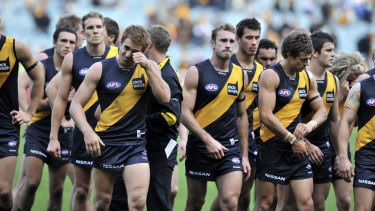 HAWTHORN did not have much going for it at the MCG yesterday. But it was a couple of wise, old heads who extracted the win for Al Clarkson’s team.

It was the impeccable timing of Luke Hodge, darting in an out of the play and always having an influence. It was the lunging tackle of captain Sam Mitchell on Shane Tuck, 30 minutes into the final quarter with the Richmond on-baller crossing the 50-metre line and about to have a shot at glory.

And it was Shaun Burgoyne, the much-trumpeted recruit from Port Adelaide who donned a helmet to protect his recently broken jaw to step out for the first time in Hawthorn colours. When he marked deep in defence in the last quarter he could be seen waving his arms, imploring his new teammates to cool down. The Richmond crowd was screaming for Campbell Brown’s blood, and the game was on the line. Here, from Burgoyne, was the sense of calm that Damien Hardwick could not quite find from his Richmond players. 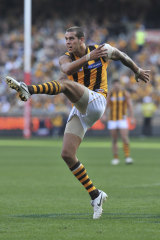 God knows, Hawthorn needed the three-point win, secured when Mitchell, who had not had his best day, summoned the courage and speed to run down Tuck and win a free-kick. But just as much, Clarkson needed to get something approaching his best team on the park. With Mitchell, Lance Franklin and the stoppage king Burgoyne resuming yesterday, it is becoming a reality. Whether it is too late is the only question.

Burgoyne, for whom the Hawks gave up so much and saw so little in the opening weeks of the season, had 20 disposals and was a strong contributor, if below his best, rating himself at 80 per cent. ″⁣He just looked polished and sharp and he knew what to do with the ball in certain situations,″⁣ said Clarkson.

As for the 27-year-old Burgoyne, he was relieved to get the second part of his career under way, albeit with a plate and screws in his jaw after a collision playing in the VFL a few weeks ago, and dragging around a helmet that is scarcely a good look. ″⁣Obviously, the team was losing and the pressure was building on the team as much as the individuals,″⁣ he said afterwards. ″⁣You just want to get everyone playing and I was happy to play my part today.″⁣

Hawthorn could easily have lost. Richmond controlled the play for big sections of the game and limited the Hawks to just 38 inside-50 entries by dominating the stoppages (19-6 out of the middle) through the manic attack on the football exhibited by Daniel Jackson (minding Mitchell and winning the duel) and Trent Cotchin (11 clearances, 14 contested balls). It left the likes of Franklin and Jarryd Roughead and Cyril Rioli to work with a pittance of ball supply.

But the Tigers could not contain Rioli (four goals), Franklin worked hard up the ground and kicked two goals, and it was just enough. ″⁣What Hawthorn have got is some polish at the top end,″⁣ said Hardwick, who admitted the numbers suggested Richmond should have won its first game of the season.

At the pivotal moment of the frenetic last quarter, Campbell Brown, celebrating his 150th game, ran at least five metres and cannoned into a stooping Jackson head-on in Richmond’s forward 50-metre zone. Umpire Damien Sully, a few metres away and looking straight at the incident, stayed mute, not even awarding a free-kick for high contact. Hawthorn swept the ball forward for a Rioli goal that made the margin 15 points. Brown, who mistakes this kind of act for bravery – in fact, it was the Richmond player risking his health – taunted Jackson as he left the field. Jackson launched a head butt in response. The temperature rose.

Richmond kicked the next two goals, the last to Jack Riewoldt from his fourth pack mark of the day, beating three opponents. But the Tigers ran out of time; a familiar lament, although Hardwick took some solace. ″⁣There’s no doubt it’s a step forward for our footy club,″⁣ he said.

NRL set to move to Queensland for remainder of the season