During the three-quarter-time break at the MCG on Saturday, Melbourne coach Paul Roos urged his players to bump and get in better position in one-on-one contests.

It proved to be an apt message, for the suddenly energised Demons would boot the opening four goals of the final term to reverse a 21-point deficit – and eventually edge their way to a stirring two-point win. 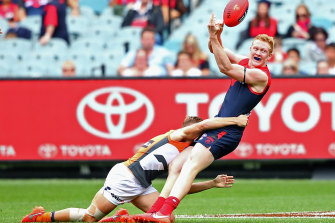 Having been unbeaten through the NAB Challenge, the Demons now have serious momentum to carry into the first month of the season in a win achieved without the likes of Angus Brayshaw, Christian Petracca and Heritier Lumumba, while Oscar McDonald would spend the last term on the bench with an ankle injury.

Having managed just the one goal combined in the second and third terms, the Demons responded in a frenzy in the opening eight minutes of the final quarter.

The initial spark came through a strong mark and goal from Jack Watts. For so long the whipping boy of supporters, Watts had the modest but vocal crowd on hand saluting him. His time to consistently shine may have arrived.

Key forward Jesse Hogan, having endured a dirty afternoon on Phil Davis, also sprung to life. Goalless to this point, he capitalised on a free kick for holding against Davis on the goal line and would back up minutes later when Watts found him with a lovely long kick.

Former Blue Jeff Garlett would also have a crucial role, for his snap, having pounced on a miskick, would give the Demons the lead and a belief this could be their day. 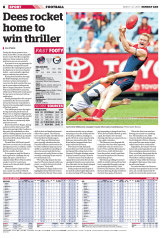 First published in The Age on March 27, 2016 – The match report. Credit:The Age Archives

It was game on and the Giants, a side expected to challenge for top eight, fell apart, aside from co-captain Callan Ward. This would be a major worry for coach Leon Cameron, for his side didn’t handle the pressure.

Demons draftee Clayton Oliver was a stand-out, with 15 of his 22 disposals contested. His composure, skills by foot and hand and general effort were superb.

The Demons have made the right call with this lad from the Murray Bushrangers.

Jack Viney and Nathan Jones were typically relentless but the Demons still have much work to do, for their inefficient disposal and inability to regularly hit a leading target in the second and third terms almost proved costly. However, they would go a stunning 80 per cent by foot in the final term.

“We had to dig deep in that last quarter. The boys stayed really composed – credit to the boys for sticking in there,” Viney said.

The Demons’ sloppy ball use was highlighted in the third term when best and fairest Bernie Vince made an uncharacteristic error when attempting to clear the ball by left foot from deep in defence, leading to a goal to Ward at a time when his side had some momentum after Dean Kent had just snapped their first major since the first term.

The Giants would ultimately lament their poor ball use inside 50, having had 28 scoring shots to the Demons’ 20 despite missing suspended key forward Jeremy Cameron.

Former Demon Tom Scully was regularly booed, but his form in the opening 10 minutes was representative of his side, for the Giants jumped into the new season with glee.

Scully produced the first goal of the match and had eight disposals in no time, burning off Tomas Bugg and prompting a change from Roos. When Devon Smith followed up with a goal, the Giants were already showing why they are expected to be a top-eight contender.

The Demons’ poor disposal efficiency hurt but once this improved, so did their returns on the scoreboard. Vince and Ben Kennedy, the latter from a crafty left foot shot from the pocket, would contribute the next two goals as the Demons found their groove.

The Giants, profiting from their ability to quickly rebound from half-back, responded through a strong mark and goal from Rory Lobb. However, the Demons, with James Harmes silencing Scully, would boot the final three goals of the term.

Where the first term was free-flowing, the second was anything but. The mistakes rose, while Cameron had his first glimpse of the frustrating side of Steve Johnson, who opted for some snaps at goal, rather than look for a teammate.

Regardless, the Giants were the better side entering inside 50, and then retaining possession in there. They would have three goals for the term, one a fortunate free kick to Ward after a dubious dangerous tackle by Viney, while the Demons struggled to find space when seeking a forward target.

So restricted were the Demons that they were goalless in the second term, yet overall enjoyed a 33-20 inside-50 count by the main break.