Adelaide produced the biggest boilover of the season and ended Melbourne’s unbeaten start with a truly epic one-point triumph on Saturday. 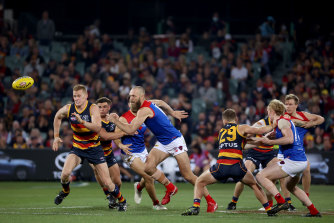 Reilly O’Brien of the Crows competes with Max Gawn.Credit:Getty Images

Taylor Walker clinched the unlikely victory, nailing his third goal with 43 seconds remaining in the absorbing contest to put his side in front. It came after he and Darcy Fogarty had earlier slotted set shots to pare back the Demons’ 16-point advantage entering time-on in the fourth quarter.

The ball was camped in Melbourne’s forward-50 in the dying moments, after a strong Christian Petracca centre clearance.

Crows backman Nick Murray was given the benefit of the doubt when he found the boundary line via hand towards the Demons’ goals before Adelaide did enough to survive the final frenetic seconds.

Clayton Oliver (38 possessions, 27 contested, 13 clearances, nine tackles), who was lion-hearted all match and absolutely magnificent after half-time, looked to have put Melbourne in control when he shrugged off Brodie Smith and swung through his third goal in the 20th minute – but Adelaide simply refused to concede. 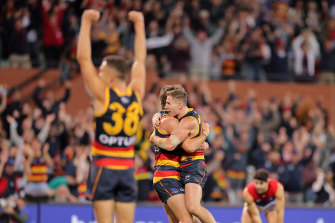 Few expected the Crows to challenge let alone conquer the Demons, red-hot favourites to move to 10-0 and extend their overall winning streak to 12 on the trot, which would have been the club’s best since 1956.

Max Gawn largely had the better of Reilly O’Brien in ruck and Petracca was the main reason Melbourne were in the game at half-time after the Crows threw everything at the favourites.

For large portions of the afternoon, the Demons were marginally off-colour, the Crows, staring at a sixth successive loss, took the ladder-leaders on valiantly and the upshot was an unexpectedly tight, absorbing contest.

After Melbourne held sway by five points at quarter-time, scores were tied at half-time before the Dees moved ahead by three points at the end of three quarters. 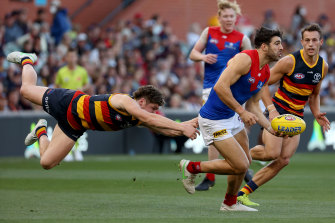 Livewire forward pocket James Rowe goaled twice in as many minutes as the Crows hauled in an early 18-point deficit to stay in the fight.

The second stanza was on Adelaide’s terms, the home side clearly having done their homework and playing with more run and dare than in recent, barren weeks.

They utilised the corridor that served them so well in the early rounds and denied Melbourne’s defensive interceptors, like Jake Lever and Steven May, by refusing to bomb forward haphazardly.

Ben Keays, Rory Laird and Paul Seedsman had 60 first-half disposals between them as Adelaide played keepings off to tie the scores at the main interval, and move ahead by 12 points early in the third, as Melbourne went off the boil – Gawn dropping a sitter in defence and conceding a 50m penalty, which resulted in Seedsman’s six-pointer.

Petracca’s 50m bomb, jet-heeled Kysaiah Pickett’s goal on the burst and Oliver’s terrific snap rejuvenated the Dees, who looked the goods with Oliver continuing to fire and inspire before Walker provided the last-ditch heroics.

CROWS BOOKED
Midway through the second term, umpire Curtis Deboy reported match-winner Walker for rough conduct after dumping Oliver in a tackle in the centre-square.

The MRO will determine if excessive force was used but in Walker’s favour was the fact Oliver’s shoulder appeared to absorb most of the impact on the turf. Oliver wasn’t floored for long. The Demons midfielder dusted himself off and slotted a flying left-foot snap less than a minute later to give Melbourne the lead. He thrived throughout the second half.

In the third term, fellow Adelaide forward Darcy Fogarty was reported for striking Jake Lever on the outer-wing after elbowing the former Crows defender in the back.

PETRACCA’S POLISH
Melbourne’s second quarter was forgettable but Brownlow Medal favourite Petracca did his best to keep his side afloat.

After tackling Seedsman in the middle, Petracca pinpointed a handpass to Tom McDonald, bolted past four opponents and got on the end of the chain that he started. With wonderful vision, he then threaded a long kick to Bailey Fritsch, who ran into an open goal, momentarily stymieing Adelaide’s charge.