It is hard to believe a match involving Hawthorn, so successful for so long, could teeter on the edge of irrelevance. But that is how it felt at the SCG, in a near-empty stadium, after the COVID-enforced shifting of their match from Darwin against the Gold Coast Suns.

Yes, Hawthorn are young and rebuilding, notwithstanding the presence of multi-premiership veterans like the recalled Shaun Burgoyne and Liam Shiels. Any sense of awe evaporated long ago. The Suns – 15th on the ladder going up against 17th – had more to lose here.

Still, it was hard to understand the listlessness of the Hawks at the beginning of this match as they slumped to a 37-point loss, and hard to escape the feeling that something more fundamental had been lost than the inevitable turnover of a list once studded with champions. 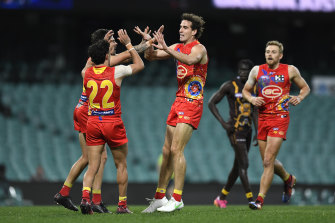 Then they left the door ajar. Late in the first quarter, Hawthorn started to find the ball, and dominate out in space. Three late goals had them just nine points back at the first change; the Suns looked like they already thought the job was done.

If Suns coach Stuart Dew gave his team a rocket in the break, they responded, adding another six goals to open up a 33-point break. Lukosius was the architect, cutting the Hawks to ribbons with his ball use and adding a goal of his own from outside 50 metres.

A cheap late goal to Tom Phillips and another to James Worpel in the opening minute of the second half kept the margin at 22 points. But from there, the Suns finally put the foot down, kicking seven goals to five after half-time to ease away from the Hawks.

It wasn’t quite ruthless, but it was good enough. Ruthlessness, though, was once part of the Hawks’ brand. That’s something they’ll have to rebuild too.