Home » Good as Gould: Young Swan closing in on debut as Rampe ruled out

Dane Rampe has been ruled out of Sydney’s clash with Geelong, potentially opening the door for what co-captain Josh Kennedy says would be a richly-deserved debut for untried Swans defender Will Gould.

Picked up by the Swans with selection 26 at the 2019 AFL draft, Gould has bided his time, watching on patiently as a glut of other draftees have been handed their debuts before him. 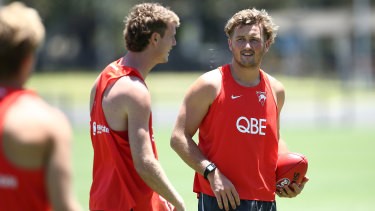 Swans defender Will Gould, right at training, is in line for a debut this weekend.Credit:Getty

But the 20-year-old’s form in the VFL, combined with Sydney’s injury crisis, could see him make his long-awaited breakthrough at the SCG on Saturday night against the Cats.

Tom McCartin is expected to recover from a hamstring issue, but Rampe saw a surgeon on Wednesday who nixed any chance of an early comeback from his broken hand – leaving the Swans desperately short on strong-bodied defenders for a match-up against Geelong stars Tom Hawkins and Jeremy Cameron.

Gould, 191cm and 98kg, could also help fill the void left by another more mobile back-six player in George Hewett, who will miss this weekend’s match due to concussion.

Gould has experience at senior level having played in the SANFL for Glenelg before joining the Swans, and Kennedy said he had been impressed by his recent form and application at training. 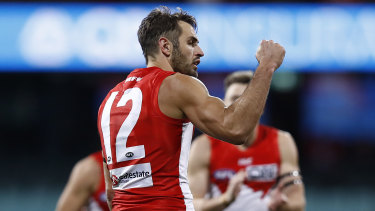 Kennedy said it would take a team-wide effort to curb the fearsome influence of Hawkins and Cameron, who played together for the first time in a 97-point rout of the West Coast Eagles.

“Obviously Hawkins is in great form as well and add Jeremy Cameron, and they’ve got some real power up there,” he said. “Their small forwards can do a bit of damage, obviously Gazza kicked three goals last week, so they’re going to have to be on our toes and we’re going to try and have to our best to make sure that the entries going into inside 50 are as sloppy as possible or limited as much as we can to help them out.

Elsewhere for the Swans on the injury front, with wingman Nick Blakey set to play despite suffering a badly-corked thigh against Gold Coast.

The Swans have lost their last two matches, having exploded with a 4-0 start to the season, and Kennedy admitted they had gone away from the tenets of their play that had worked so well for them.

“If you look at our games earlier in the year, our pressure rating was really high, and that’s probably dropped off the last couple of weeks … our intensity around the footy, scramble pressure and that sort of stuff,” he said.

“It all goes hand in hand, with the contested footy, the pressure, your intensity around the ball. We’ve got to try and get that back up to where we know we can play at and it’s a real strength of Geelong’s too, so it’s going to be a good contest.”