They used to be the princes of the game, rugby league centres. Conjure up visions of the modern greats and you might see Steve Renouf striding out like an Olympian, or Mal Meninga leaving a trail of bodies as he tramples his way to the tryline.

These days, the threes and fours must be perfect 10s in defence and do more grunt work than a GI (not Greg Inglis). You only need to listen to Rabbitohs centre Campbell Graham’s mindset before the grand final for an insight into what he expects from the Penrith defence.

“I’ll put my body through hell to get the result,” Campbell said. “Everything hurts, especially at this time of year, but we’ve only got one game to get through.

“I know it’s going to be the toughest game I’ve ever played and that’s how I have to think going into it.”

Graham has been one of the unsung contributors for the Rabbitohs, adding 10 line breaks and nine tries to his courageous carries out of defence, where the towering 22-year-old is often met with stinging shots from rushing tacklers.

And he’s offered a big body in a key defensive position, saying he wasn’t happy with his effort on that front against Manly but feels he has grown immeasurably in that department with the guidance of Souths assistant and future head coach Jason Demetriou. 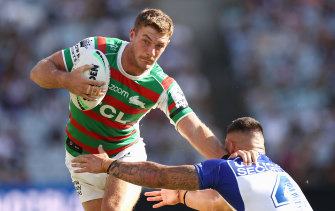 Campbell Graham never shirks the tough work for the Rabbitohs.Credit:Getty

“I give that credit to Jason D. I’ve been trying to stay in that system as much as I can and I’m working with him every week,” Graham said. “I thought last week I was a bit disappointing, I have to be better this week. It’s a big focus for me.”

The running joke at Souths is that Graham is Wayne Bennett’s long lost son. His dad, Stewart, a Glaswegian sewing-machine mechanic, is apparently a dead ringer for the supercoach.

“They could be brothers,” Graham said. “But Wayne has been great for me. He’s made sure I’ve had a level-head and never get too far ahead of myself.”

Maybe Graham has been in Queensland for too long but he’s eager to latch on to the underdog tag that has been assigned to the Rabbitohs since their heavy losses to Melbourne and Penrith mid-year. Even after beating the Panthers in week one of the finals, they arrive in the decider as outsiders.

“It does sit well me me, yeah. We had some big losses to Penrith and Melbourne, so that’s where it stemmed from. Credit to them, they played great football all year,” Graham said. “But if we turn up on the day, we’re as tough to beat as anybody.”

Key Cat Stewart a chance of returning … for grand final