'Up the milk' will no longer be a slogan of nostalgia for Canberra Raiders fans, with the club unveiling Canberra Milk as a major sponsor for 2021.

Huawei announced in August they would be stepping aside as major sponsor of the club due to the fallout from COVID-19, allowing the club to re-negotiate the contract with their long-term partner. 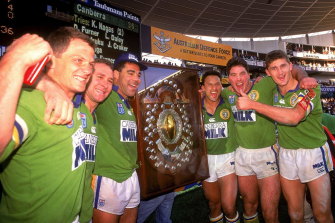 The Milk era coincided with the Raiders’ last premiership in 1994.Credit:Daniel Landon

Coach Ricky Stuart said he was excited about bringing back the milk.

"When I heard about the discussions taking place and saw the garment artwork featuring the Canberra Milk logo, it brought a smile to my face," he said. "It brings back some great memories”.

Across the four decades of partnership, Capitol Chilled Foods Australia has displayed three of their brands – Bega Cheese, Canberra Milk and Dare Iced Coffee – across the club's apparel.