Toby Greene’s management is prepared to go to police over a person who made highly offensive comments about the Greater Western Sydney star on his partner’s social media account.

The AFL’s integrity unit has been made aware of the Instagram post, a direct message to Greene’s partner which told the star forward to kill himself.

The message was sent in the aftermath of Greene’s suspension for making contact with umpire Matt Stevic. Greene received a three-match ban for the incident against Sydney in last Saturday’s elimination final. 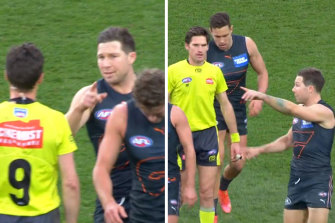 Toby Greene has been suspended after bumping umpire Matt Stevic during the Giants’ elimination final win over Sydney.

Greene’s manager, Paul Connors, said his client wanted to know the identity of the person who sent the deeply offensive post.

“We’re trying to find the identity [of the person who sent the post] and if we do, we’re more than happy [for] it to be handed over to the police,” said Connors.

The police have not yet been informed.

AFL Players’ Association (AFLPA) chief executive Paul Marsh said he had seen the offending post and that the account had clearly been set up for “the specific purpose of trolling Toby”.

Marsh said it was very similar to an attack on Port Adelaide star Aliir Aliir in that a social media account had been created with the aim of abusing the player. In Aliir’s case, Marsh said it was a racist attack.

“What sort of sick human being would resort to this sort of level?” Marsh said.

The Giants are appalled by the message to Greene’s partner, which is the second time in little more than 12 months that one of their leading players has been the subject of attacks on social media as a result of an incident during a game.

But, to the frustration of GWS, attempts to uncover the identity of the person threatening Ward were unsuccessful. While that person was an Essendon supporter, the poster was not believed to be a member of the Bombers.

Greene has been subjected to a number of offensive attacks on social media since the report for making contact with Stevic in GWS’s one-point victory over the Swans, prompting the most-watched and contentious AFL tribunal case of 2021 that concluded on Tuesday.

The AFL has appealed Greene’s three match ban on the grounds that it was inadequate, with the league – backed by chief executive Gillon McLachlan – having sought a six-match ban.

Greene and Ward are among a number of players who have received offensive or threatening posts on social media in recent years, with Richmond premiership player Dylan Grimes also targeted, while Indigenous players are still subject to racist attacks on a regular and ongoing basis, a situation that the AFLPA has been trying to combat with limited success.

Marsh said the reality was until social media companies found a way to identify online trolls, it would be difficult to deal with some attacks. “There’s been far too much of it.”