Jake Lloyd and Chad Warner will miss Sydney’s AFL season-opener after a COVID scare went through the team that left skipper Dane Rampe admitting it felt like “Groundhog Day” amid a spike of cases in the city.

Lloyd, a crucial and consistent contributor in defence for the Swans, and Warner, one of several standout youngsters who helped propel them to the finals last season, won’t feature against the Giants on Saturday – although it’s unclear whether they have both tested positive or have simply been deemed close contacts who must isolate.

Either way, it is an early sign – along with the postponement of an AFLW final and a handful of other cases across the men’s competition – that the pandemic is not yet in footy’s rear-vision mirror, despite the AFL’s insistence on forging ahead with all matches as scheduled.

The last time the Swans met the Giants in the home-and-away season, a group of 15 players and officials from both clubs had to sit out the match because they’d attended a Wallabies Test in Melbourne where there had been positive cases.

Rampe was coy on Thursday morning when asked about the evolving COVID situation at the Swans, which prompted the club to close ranks by blocking media from attending their training session and putting the 31-year-old up for media duties on Zoom instead of in person. 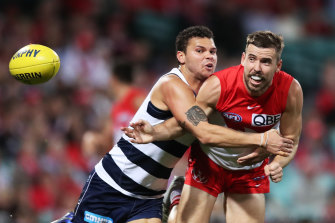 Jake Lloyd will miss Sydney’s season-opener against the Giants.Credit:Getty Images

But he admitted that players would now place themselves under self-imposed restrictions and avoid large gatherings in public places to ensure availability for games now that the season proper has arrived.

“Over the pre-season it was a little bit more relaxed … but I think now that we’re in season, it’s going to be a genuine competitive advantage that we can gain or other teams can lose,” Rampe said.

“The good thing is the last two years we’ve had a lot of practice at doing it. It just seems a little bit like Groundhog Day. To be honest, we’re not rattled by it at all, it’s just the nature of the environment at the moment.

“Our boys take pride in seeing it as an opportunity, and we’ll do that this week should something present itself. It is a little bit annoying having to deal with stuff for a few days, but that’s the reality of it, and we’re going to keep on keeping on.” 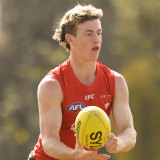 But the circumstances have not discouraged Rampe or his teammates from embracing the circus that is set to follow Lance Franklin and the Swans in the lead-up to the veteran forward’s 1000th goal.

AFL chief executive Gillon McLachlan gave a tacit approval to the age-old tradition of fans running onto the ground whenever such a milestone goal is kicked, although they will be risking hefty fines by doing so.

Rampe said the Swans were still looking forward to that moment and weren’t concerned about the prospect of mixing with the public on the field when Franklin becomes just the sixth player in VFL/AFL history to reach that number.

“The team’s comfortable with it, I’m sure,” Rampe said with a grin. “That’s more for the AFL and the security around the ground. We’re really embracing that energy and excitement around that because I feel like as a player Bud deserves that, but it hasn’t taken any focus off the game. What will be will be, but we’re not too worried about the restrictions and the crowd coming on.”

The Swans’ team is otherwise largely settled from their final pre-season outing against North Melbourne, with draftee Angus Sheldrick named on the bench for his debut and Hayden McLean preferred over recruit Peter Ladhams for the back-up ruck/forward role.

The Giants, meanwhile, will be without key forward Jesse Hogan and All-Australian defender Nick Haynes. Hogan is a chance of playing in round two, while Haynes will play in the VFL this weekend as the club manages a mystery stomach issue.

‘We’ve got to have ambition’: Noble embraces North top-four plan

Ruthless RFU must act and hand grassroots clubs a lifeline