St Kilda ruckman Paddy Ryder has been ruled out of the Saints' semi-final clash against Richmond on Friday night with a hamstring injury.

The club is set to confirm details of the injury, which left the veteran big man in tears as the siren sounded during St Kilda’s three-point elimination final win over the Western Bulldogs on Saturday. 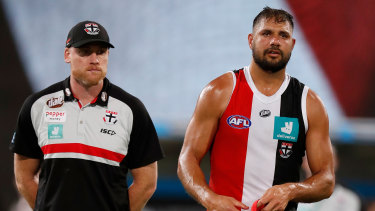 The Saints could also be without Jake Carlisle as the defender weighs up whether to leave the AFL bubble to be with his expectant partner in Moama.

St Kilda will also learn on Sunday whether backman Ben Long is offered a suspension for his high bump on Bulldog Jack Macrae.

Swingman Josh Battle is no guarantee to return against the Tigers as he battles foot soreness.

Listen: Hollywood royalty on the Will Greenwood podcast