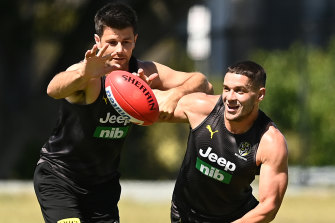 Riewoldt expressed confidence on Sunday that his partner-in-crime Tom Lynch will recover from a hamstring injury suffered against Geelong exactly 21 days before the qualifying final while last year's best and fairest Dion Prestia and emerging midfield weapon Shai Bolton are also in the frame.

Prestia has not played since suffering an ankle injury in round five but impressed in a solid hitout on Saturday that indicated his syndesmosis problem was behind him.

Bolton has been among the Tigers' best this season after replacing Prestia in the middle with his clearance work a key factor behind Richmond's improved form since arriving in Queensland. He was managed for the Adelaide match and is certain to return.

"One of the injuries we don't speak about is the headache 'Dimma' is going to have when it comes to selection," Riewoldt said.

"It's obviously a tough one for players who have to make way for those three."

Riewoldt said every day was important to Lynch's recovery but he was on track to take on All-Australian Lion Harris Andrews, who was also recovering from a hamstring injury of his own.

"He's given himself every chance to play. He'll train with the group on Monday and build his case from there." 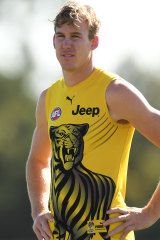 Lynch, who kicked three goals against the Brisbane Lions when they met in round two, would likely replace Mabior Chol, while the unlucky Jack Ross could make way for Prestia.

Josh Caddy could also be under pressure to hold his spot with Kamdyn McIntosh bouncing back well from the disappointment of missing last year's finals to play every game since round four.

Riewoldt was looking forward to getting Prestia back into the team.

"Dion is right to go … he has put himself in a great position to play," Riewoldt said.

Despite 15 consecutive wins against Brisbane since 2009 – Hardwick is yet to lose to the Lions as coach – Riewoldt said this match would be a different kettle of fish as he expected his opponents will be "hungry to win".

The Tigers are aiming to become the first Richmond team to go back-to-back since 1973-74 but Riewoldt said that fact had not been emphasised.

He said they had spoken about embracing the imperfections of the season, the topsy-turvy nature of it and the fact you have to be ready to go at any second, Riewoldt said.

However the 31-year-old said experience built up over three consecutive post-seasons – where the Tigers have won seven of eight finals matches – gave them confidence.

"[It] builds good evidence for myself and for the side as well. We have found ourselves in this position before and we have been successful," he said.

‘Not NRL standard’: Dragons’ pack roasted over ‘lack of desperation’ in defence