Richmond coach Damien Hardwick has revealed Dustin Martin was initially nervous in his comeback last weekend but says there is no reason why the superstar Tiger cannot again be the best player in the competition.

Martin had his first match last weekend since he suffered a serious kidney injury in last year’s round-18 win over Brisbane. While the 260-game veteran was rusty in the three-goal win over Geelong, he played most of the four quarters and there were glimpses of his brilliance. 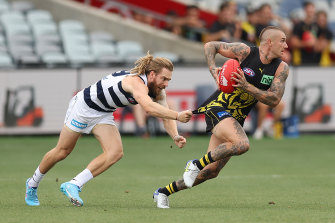 Dustin Martin was back in action for the Tigers on Saturday against Geelong.Credit:Getty Images

Last year he finished equal fifth in Richmond’s best and fairest but his form before the injury wasn’t at the gold-plated level of 2017-20, when the three-time Norm Smith medallist and Brownlow winner was consistently a destructive force.

However, Hardwick said the expectation for Martin, who will turn 31 in June, was that he would be back to his dynamic best in a year when the Tigers hope to again challenge for the flag.

“It’s obviously a significant injury he is coming back from,” Hardwick said at the Fox Footy season launch on Wednesday.

“He had his first hitout really on the weekend. He was the first to admit in the first couple of contests he was a little bit nervous about what that would look like when he raised his arms. But he grew in confidence and got better as the game wore on.

“He works incredibly hard on every facet of his game. That’s why he is one of the best players in the league. I am looking forward to watching him play. I know most people are as well.”

Martin shed significant weight after his surgery because of the diet he was restricted to but he is now back in mint condition, ready to be a game-turning force through the middle of the ground and forward of centre.

Injuries to key personnel and a game plan that rivals knew all too well conspired against the Tigers last season. That they had enjoyed four consecutive deep finals runs, reaping three flags, meant they were also physically and mentally tired.

Hardwick said the club had worked on mentally refreshing the players.

“Expectations are obviously high because, obviously, it was a down year last year. But we feel that we have covered that space really well, mental space, we have done a fair bit of work on that over the course of the summer as well,” he said.

“I think the competition has become much more even over the course of every year. And that’s a great thing about our game, any given Sunday any side can win. So, it’s going to be an exciting year – there are going to be a lot of sides putting their hand up to win it. Hopefully, we are one of those sides.”

The Tigers have made changes. David Astbury and Bachar Houli have retired, there is young talent emerging, including key defender Josh Gibcus, while Trent Cotchin has handed the captaincy to Dylan Grimes and Toby Nankervis.

This could be the last premiership run for Cotchin and fellow veteran Jack Riewoldt, the latter having told The Age his premiership teammates were conscious of their legacy and leaving the team in a good spot.

Hardwick said the Tigers, tipped by many to return to the top four, were ready for what awaits.

“We are reasonably confident. I think the one thing about our industry, our game, Melbourne, obviously, won it last year, [is] well, why not us? We are one of those sides that have had a great pre-season, but until that first ball is bounced, you are never quite sure.

“But we have strength in leadership at our footy club, we are really bullish about the way we will go this year. We are very excited to start and ready to go.”

The Tigers face Hawthorn in an AAMI Community Series match in Devonport on Saturday. They open the season proper against Carlton on March 17.