Home » Rugby » Hawkins is the Cat who wants the cream

It's not often opponents sleep under the same roof during grand final week but so it's been this week at Royal Pines on the Gold Coast as players from both Geelong and Richmond with families in tow share accommodation.

Tom Hawkins, his wife Emma and two daughters Arabella and Primrose, moved there in mid-September and although it took a little adjustment, seeing a few Tigers in the same digs, it's become the new normal. 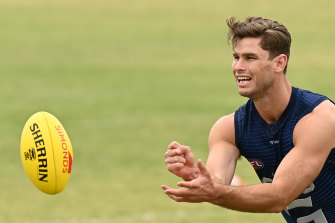 Not that much worries Hawkins anyway. The sometimes dominant, always consistent performer became a worthy first-time Coleman Medal winner after kicking at least 50 goals in each of the previous six pre-COVID-19 seasons.

Even the sore throat at the start of the week and its subsequent coverage didn't stress the 32-year-old, who heads into his third grand final with 48 goals and numerous goal assists to his name.

At the Cats, Hawkins is everyone's favourite big brother, an avuncular figure who is simply regarded inside the football club as the nicest guy going around.

That doesn't mean he is perfect. The misplaced aggression that sidelined him for last year's preliminary final became just one of a number of badly timed brain fades that have led to reports for relatively minor incidents in recent years.

But this competitor without a selfish streak has improved with age, maturing and feeling comfortable within the game and outside it on his 62-hectare farm in the Barrabool Hills near Geelong.

Whether this season has been his best is up to others to decide, says Hawkins, in his unhurried, R.M. Williams drawl, but he admits he has found himself in a sweet spot after years of hard work and in a grand final again, 3312 days after he announced himself in the 2011 decider.

"I do feel really confident in my body and just the way I am able to prepare," Hawkins said.

"My attitude and professionalism towards the game has changed as well. I am really confident in all facets of my life, and in particular football, so I think that is helping me play well."

He even puts his ability to control boundary throw-ins – where he looks more and more threatening every week – down to work that started 10 years ago when he was trying to find a spot in the team and played in the ruck.

"I have always said that the body work I learned on the ruck helped me as a key-position forward," Hawkins said.

"Our midfield and stoppage coach Matty Knights has been awesome and they have given me a licence to have a go in there. I have certainly had games this year where it hasn't gone my way but it is nice to work with players on the ground as well."

He's grateful, too, for the family support, not only from his wife in Queensland, but from his brother Charlie and sister Jane, who have looked after the farm while they have been away.

Hawkins describes himself as a hobby farmer, well aware that whenever he is described as a farmer it gives his cousins back in Finley, where he grew up, a good laugh.

"I have been very fortunate. Being three months away, there are some tasks [on the farm] that need to be done," Hawkins said. "It has made my task a lot easier."

That's a relief because on Saturday night he faces a difficult task against Richmond, who have beaten the Cats in five of their past six encounters with Hawkins kicking 10 goals in the five games he has played against the Tigers in that period.

Noah Balta, who emerged like a shark tooth to replace Alex Rance on the last line of defence, is likely to have the big job on Hawkins, who is as focused on winning the flag as he was when the team packed their bags for Sydney in July.

"We went away still thinking it was an opportunity for there to be a 2020 premier and that was firmly in our sights right back then," Hawkins said.

"There is a large task in front of us to topple Richmond. We can't wait for the challenge."