The AFL’s decision not to move this match from Marvel Stadium to the MCG might have denied thousands of Hawthorn fans from attending but those who were on hand enjoyed an unforgettable night.

Down by 40 points late in the second term, the Hawks completed a stirring comeback as a Tim O’Brien goal with 90 seconds left secured a one-point victory over archrivals Essendon. 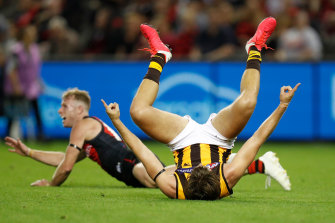 Tom Phillips celebrates a goal for the Hawks in their comeback win over Essendon.Credit:Getty Images

After a helter-skelter final term in which both sides had peppered the goals without taking advantage, Devon Smith had put the Bombers back in front at the 23-minute mark. But a Liam Shiels pass to the forward pocket was met by O’Brien who converted from close range, from which point the Hawks clung on to claim the four points and deny Ben Rutten in his first premiership season game as Essendon coach.

The match had been heading firmly in the direction of James Hird’s coaching debut pageant 10 years ago to the round, also at this venue, as the Bombers took control of the game in the second-term after a tight opening stanza edged narrowly by the Hawks.

Essendon’s new-look forward line of Peter Wright, Cale Hooker and debutant Harrison Jones looked dangerous, although Jones was wasteful in front of goal, while the Bombers also out-tackled the Hawks. 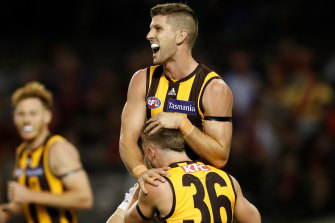 A romp beckoned when the margin shot out to 40 late in the second term and was still 39 at the long break.

But in a reversal of what transpired when these sides met late last season at Adelaide Oval, Hawthorn surged back in the third quarter. Remarkably despite being shaded in the inside-50 count for the term (16-15) the Hawks kicked 8.0 to 1.4 to trim the margin back to within a goal with a quarter to play.

The ground opened up for the Hawks, who repeatedly swarmed from half-back and took full toll inside 50, with Jarman Impey, Blake Hardwick and Will Day all central to the comeback and Dylan Moore having the quarter of his life up forward.

Essendon debutant Nik Cox is one out of the box as a 200-centimetre wingman. The trouble at that height is that it’s a long way down to the ground. A clumsy attempt from the first-gamer to win a ground ball against 181-centimetre Hawk Ollie Hanrahan ended with the umpire taking Cox’s number for a high hit on Hanrahan. Fortunately, Hanrahan was OK but it was still a dangerous incident that will draw attention from match review officer Michael Christian. Hanrahan duly converted a set shot from the resultant 50-metre penalty.

McEvoy on the mic

New Hawthorn skipper Ben McEvoy has a dry, country sense of humour and it came through during the third quarter. Pinged by field umpire Rob Findlay for a throw, veteran ruckman McEvoy, protested, citing his profession to show he was hard done by. “I literally tap it for a living,” McEvoy said in an exchange that was caught on the Channel Seven broadcast.