Hawthorn took only a quarter to get used to their new hub in Perth on Friday night.

After losing four games on the trot between the Sydney Showgrounds and the SCG, and suffering a tough week of criticism and finger-pointing, the Hawks recovered from a slow start to take control of their clash with Carlton and score a 31-point win.

The Blues led by 31 points midway through the opening term at Optus Stadium, before the Hawks turned a switch. 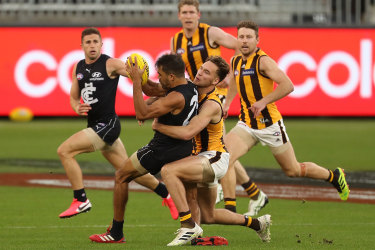 From the 20-minute mark of the opening term, it seemed like the Hawks had decided to leave their woes in Sydney. And they won’t be in too much of a hurry to get back there.

James Worpel looked more like the player who won the Hawks' 2019 fairest and best award than he has in all of 2020.

Tom Mitchell and Jaeger O’Meara, both drafted into the AFL from the WAFL, seemed to relish the rare chance to play in Perth without the parochial local crowds cheering against them.

The Hawks brought in 478 games of experience during the week after losing to the Sydney Swans by seven points last round – Jarman Impey, after a year out with an ACL injury, Luke Breust, who missed four games with a broken jaw, ruckman Jon Ceglar and forward Tim O’Brien.

The selection of all four paid off for coach Alastair Clarkson.

While the ‘older’ Hawks were being called out during the week as the potential reason why their club was struggling, it was their cool heads and hard running that got them back into the game after a slow start.

The experience of Liam Shiels, Shaun Burgoyne, Isaac Smith and Mitchell allowed the Hawks to turn the screws and the Blues buckled.

The turnovers started to come from Carlton, all across the ground.

Levi Casboult kicked the first of his three goals to start the second term to put the Blues 25 points in front.

But even before that the Hawks had chances to score, but blew them. They didn’t waste many after that.

Shiels and Smith each kicked two for the term and Burgoyne had nine touches for the term. Hawthorn kicked the next six goals before half time to lead by 13 at the main break.

If O’Brien hadn’t dropped a sitter just seconds before the siren sounded for half time, that margin could have been 19 points.

Half-way through the opening quarter, the result that seemed most likely was a Carlton blow-out victory.

Remarkably, Carlton kicked the first five goals of the game to lead by 31 points after just 16 minutes.

They were led by Patrick Cripps who was held to 16 touches in the last round by North Melbourne. On Friday, however, he had 11 in the opening quarter at Optus Stadium.

The Hawks were second to the ball and couldn’t hold a tackle. Those who did get their hands on it were caught trying to do too much.

The Blues had 22 more possessions for the quarter, 13 more contested possessions, eight more tackles and seven more free kicks as the siren sounded with Carlton 19 points in front.

While the Hawks are usually methodical with their ball use, they ended the first term with just 65.7 per cent disposal efficiency.

But there was a small change in momentum just before the end of the term, which snowballed in the Hawks favour.

Late goals to Will Day and Luke Bruest kept the Hawks interest in the game alive – even though both needed some clever work.