Melbourne Rebels captain and Wallabies star Dane Haylett-Petty doesn’t know when he will play his next match of rugby but is confident the after effects of a concussion he sustained in the Bledisloe Test in Sydney in October won’t end his career or prevent him from representing Australia at the next World Cup.

The Herald can reveal Haylett-Petty, the 38-Test Wallaby, won’t line up for the Rebels in their first outing of Super Rugby AU on February 26 against the Queensland Reds and has no return date locked in as he receives advice from specialists and some of the best doctors in Australia after complaining of migraines in recent months. 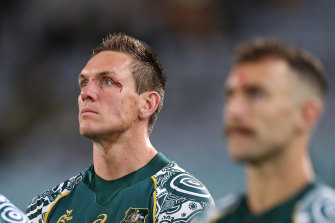 The 31-year-old is remaining positive despite not playing a game of rugby since Australia’s loss to the All Blacks in Sydney on October 31.

Haylett-Petty copped a “relatively innocuous” knock to the head at ANZ Stadium and despite trying to recover for the following weekend in Brisbane, wasn’t cleared to play.

It was Haylett-Petty’s fourth concussion during a game, but this one did not seem to go away. He’d been knocked out badly three years ago when he collided with Israel Folau’s hip, yet this knock was different, even if at times he has felt fine.

“It lingered, which I’d never experienced before,” he said. “One of the weeks I tried to ramp up the contact again but got headaches, so it was a couple of weeks of headaches and concussion symptoms. Then we decided to pull back. I was just struggling with the contact stuff. Every time I did contact, the symptoms came on again. We decided to call it a year and have the last couple of weeks off. Then things improved over the time off.”

Haylett-Petty showed up for pre-season training with the Rebels but it became clear that something still wasn’t quite right. He did fitness tests, started with some more running, but the headaches returned.

According to the Rebels captain, all medical advice suggests there is no major issues long term, however the uncertainty of a return date hasn’t been easy to deal with. 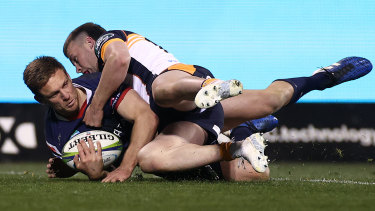 Dane Haylett-Petty is confident he will be back on the field sooner rather than later.Credit:Getty

“I’ve been to see three of the best doctors in Australia and apparently the world,” Haylett-Petty said. “The neurologist has basically said I have migraines, which has been triggered by the head knock but it could be triggered through stress or other reasons. That’s why he said to me he doesn’t think there is any implications long term. It’s about managing the migraines.

“I also know a couple of rugby players who have been through this thing. I have had chats to them about it and the great thing is they’re back playing and going well. It’s about getting back on top of it.

“At the moment we’re trialling a few different things. We’ve reduced my load, so that’s why I’ll definitely miss the start of the season. The tough thing with it is you just can’t exactly put a return date on it at this point. I suppose the advice was if I want to keep playing then it’s best to get on top of it now.

“The specialist basically said I will be fine, but he can’t tell me how long it’s going to take. It’s very person to person. He said people are fine a couple of weeks later and some guys take a lot longer.

“The worst thing is not having a timeline. Every other injury I have had I have worked to a timeline and a plan. The rest of the news has been pretty positive.”

Rebels chief executive Baden Stephenson and coach Dave Wessels have been highly supportive of Haylett-Petty through the uncertainty and both told the Herald they would not risk putting their star player back on the field too soon.

At the moment, Haylett-Petty is running and getting plenty of bike sessions in, with the hope that he can return to full contact with the doctor’s tick of approval.

As one of Australia’s highest paid players, Haylett-Petty’s motivation to pull on a gold jersey at rugby’s centrepiece event in a few years hasn’t been diminished.

“I told them I’d love to play three or four more years, play through to the next World Cup and their advice was it’s a long year of rugby … so the best thing is to pull back now, get on top of it and build from there,” Haylett-Petty said.

“Obviously desperate to get back for the Rebels and we’ve got a big year ahead, but it’s not worth my health and pushing through.”

The Rebels have a bye in round one of Super Rugby AU before travelling to Suncorp Stadium.