Home » ‘He’s in’: Cameron ready to be unleashed

Chris Scott has declared Geelong’s boom off-season recruit Jeremy Cameron ready to play, ahead of the Cats’ tough task against West Coast in round six.

The former GWS forward and 2019 Coleman Medal winner has been battling hamstring injuries since joining the Cats but Scott said it was time to unleash him into the forward 50 in the blue and white hoops.

“I am also putting a bit of pressure on our medical and conditioning staff. It is about time,” Scott then joked. 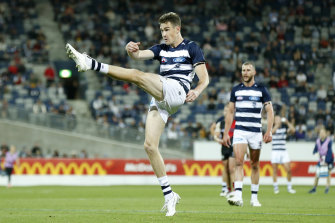 The Cats will welcome Jeremy Cameron’s return after an uneasy win against the Roos. Credit:Getty Images

Cameron’s arrival would be perfect timing given the Eagles boast one of the strongest aerial defensive units in the competition.

The dual All-Australian would also be a much needed boost for the Cats, who were again not great in their win over bottom-of-the-ladder North Melbourne at GMHBA Stadium on Sunday. The coach had said last week that the club were being deliberately cautious with their new star.

Geelong missed a lot of opportunities and were poor kicking inside 50, but given the amount of possession and chances they had ended up over-running the young North side.

“We were still going OK statistically in the first quarter,” Scott said. “I would like to say we started executing better [but] I don’t think it was that, I think it was the weight of numbers [chances].

“The opposition in particular were good early and it took us a bit of time to get on top of them.”

Scott said the Cats did not need to drastically change their gameplan to begin playing better, over and above the regular tweaks that teams make to their system.

He did admit things were not going as well as they could be, however.

“We have got a bit to work on in our game,” Scott said. “Three [wins] and two [losses] at the moment I don’t think we’re in love with the way we are going. Got a lot of improvement and some hard games coming up so I hope the execution improves. There is a bit of [a] system as well leading to a lot of those shots.

“Our overall system, there are some things happening that aren’t by design. There are a lot of specific areas that we’re a bit off in at the moment.

“The positive is tonight in isolation we competed really hard.

“Hopefully when we get more consistency with our personnel it will start to marry up with the things we are working on during the week.”

Scott was confident that Patrick Dangerfield would be fit for next week despite an ankle complaint which forced him off in the final term.

While North Melbourne coach David Noble was not happy to lose, he was impressed with his side’s commitment to the contest and the plan they came to Geelong with.

He confirmed Aaron Hall would miss next week through concussion after a wayward smother by Mitch Duncan.

“Our guys really came to play today. I thought it was a great learning experience for our group against a top team,” Noble said.

“It could have easily opened up a little bit. Cats didn’t kick straight but I tell you what we had a lot of chances we didn’t take … we just haven’t got that connection right in the front half of the ground.”

‘It was pretty scary’: Dalton on the mend with more Games glory in sight