Brett Hodgson took a pay cut when joining Parramatta in 2000 in protest at Tommy Raudonikis being passed over to coach the inaugural Wests Tigers team.

The Tigers’ clash with the Cowboys on Sunday is officially a sellout as fans flock to Leichhardt Oval to pay their respects to Raudonikis. The club will retire the No.7 jersey across all four grades and the NRL side will wear the Magpies-inspired black jersey rather than the orange strip that was initially scheduled to be worn. 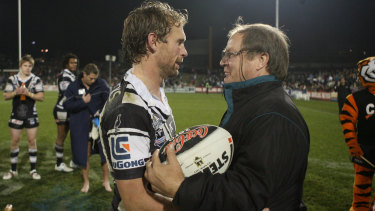 “I got offered a deal to stay at Wests Tigers when they first merged,” Hodgson recalled. “I had a conversation with Tommy that I was going to stay. I felt my loyalties lay with Tommy and I took less money to go to Parramatta.”

“I had a lot of respect for Wayne Pearce [who was the first Wests Tigers coach] … but I had a lot of loyalty to Tommy,” said Hodgson, who now coaches English side Hull FC. “The rest is history.”

Raudonikis gave Hodgson his first-grade debut midway through the 1997 season, but he didn’t get much game time.

“It was funny the way my story played out,” Hodgson said. “In my first game I was on the bench and didn’t get on until the 78th minute because Tommy forgot I was on the sidelines.

“Paul Langmack came off, grabbed the walkie-talkie and said: ‘Tommy, you’ve got [Hodgson] down here, are you going to put him on?’

“Tommy asked me where I wanted to play and I said fullback.

“That’s how it happened for me.

“That summed him up. You just wanted to play for him and give it all you could.”

One of Hodgson’s enduring memories of Raudonikis was the routine he put the team through after games. The coach would take them out to Chili’s Texas Grill in Woodbine, which had a large hill behind it.

“We’d call it Chilli’s Hill,” Hodgson said. “He would drive up to the top of the hill, sit on the bonnet of the ute and yell at us to keep running until he finished his drink.

“There was no recovery, it was just move into the next run.

“It didn’t matter if you were injured or sore, you had to keep going, even if you had to vomit on the run.

“That’s the way he was. He was so passionate that you just wanted to do anything for him.”

The story came full circle when Hodgson signed with Wests Tigers in 2004 season and famously went on to win a title with the joint venture in 2005.